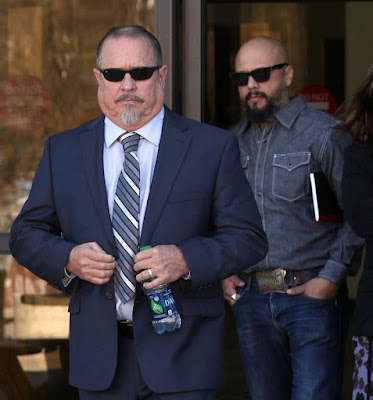 Lawyers for a former leader of the Bandidos Motorcycle Club on Tuesday began chipping away at the testimony of a key government witness, a woman who became “property” of the notorious biker club. That witness, Magenta Winans, 46, testified on Friday that she helped the Bandidos murder a street gang member in retaliation for the killing of a fellow biker, aided their drug trafficking and ran the group’s call girl service in San Antonio, called Platinum Escorts.
Her testimony was offered by the government in support of a federal indictment that alleges that the Bandidos’ racketeering enterprise spanned 16 years, from 2000 to 2016. Her testimony dealt mostly with allegations over the first half of that period.

While some of her testimony implicated several Bandido members, none is on trial other than former national president Jeffrey Fay Pike and ex-national vice president John Xavier Portillo. Pike, of suburban Houston, has been president of the Bandidos since 2006 and was vice president under George Wegers of Washington state, who was removed after he was indicted in his own racketeering case. Portillo, of San Antonio, became a member of the Bandidos’ national chapter in 2002, first as a sergeant at arms, and he later became the club’s national vice president in 2013, according to testimony.
Both were arrested in January 2016 as part of the government’s efforts to take down its leaders. Testimony so far in the trial, which began Feb. 27 and is expected to last three months, has shown that the feds made much of their case by squeezing Bandidos members from the San Antonio area, who agreed to cooperate in order to get leniency for their own crimes.

RELATED: Ex-Bandido cries as he tells how he ended life of Hells Angels member (link is external)

Winans’ testimony largely implicated Portillo. Though he and Pike are charged in a series of crimes related to racketeering conspiracy, including allegations that they ordered beatings or sanctioned murder, only Portillo is charged in the January 2002 murder of Robert Lara, a member of the Two Six Nation street gang.
She testified that she drove Lara to a waiting Bandidos ambush at a picnic area off Interstate 37 in Atascosa County, where he was shot repeatedly, after he confessed to her that he had killed Bandidos member Javier “Jay” Negrete in late 2001 at Tifanny’s Billiards on San Pedro Avenue.

Her help, Winans claimed, endeared Winans to the Bandidos in San Antonio, and she said Portillo also told her that the club would make her “property” in order to keep her working for the club and to fend off any attempts on her life. She said she even lied to or stonewalled law enforcement when they questioned her about her involvement in Lara’s killing.

One of Portillo’s attorneys, Robbie Ward, tried to show jurors that Winans only implicated her client to save her own skin. Winans had a series of drug-related arrests before 2007, and decided to cooperate against some Bandidos that year. She pleaded guilty to a federal misdemeanor of possession of methamphetamines, and served two years of probation with drug rehab. Winans was not charged in Lara’s killing as part of a deal with the feds.

Ward reminded Winans that she didn’t mention Portillo’s alleged involvement until recent years. For instance, Ward pointed out that, when Winans was questioned in 2007 by law enforcement, she told them that Andrew “Corky” Gomez, then the vice president of the Bandidos’ Southwest San Antonio chapter, was “the boss” — and not Portillo.

Winans admitted she had an affair with Gomez, who was vice president of the Southwest Chapter under Portillo. At the time, Portillo was the local chapter’s president until he was voted into the national chapter — with the rank of sergeant at arms — in May 2002, four months after the Lara killing.

It was part of the defense strategy — to show that any crimes Winans blamed on the Bandidos were actually tied to Gomez or others he directed, including Richard Merla, who was kicked out of the Bandidos for killing noted San Antonio boxer Robert “Pikin” Quiroga in 2004. For instance, Gomez initially asked Winans if she loved him enough to kill for him when she was being recruited to help lure Lara to his death.

Over and over, Ward called Winans on discrepancies in her statements to the feds and her testimony. Winans said that the death of her son in 2010 left her with PTSD, and as a result, her recollection can vary.
“I just remember traumatic events, but not other details,” Winans testified.

Meanwhile, Gomez and Frederick “Fast Fred” Cortez have pleaded guilty to federal charges related to Lara’s killing and may testify against Portillo and Pike. It was not immediately clear if jurors will hear from Merla, who is serving time in state prison for the killings of Quiroga and Lara.