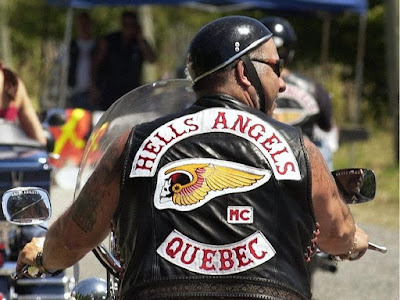 Michel "Sky" Langlois, a founding member of the biker gang's Quebec chapter, also was taken into custody. Police carrying out a series of raids targeting the Hells Angels in various parts of Quebec on Tuesday arrested more than 60 people, including a member of the Repentigny police who is alleged to have acted as a courier for a drug trafficking network.

Captain Guy Lapointe, a spokesperson for the Sûreté du Québec said Carl Ranger, a member of the Repentigny police force, was among the 63 people arrested in Project Objection, an investigation of several members of the biker gang.
“The investigation revealed that Carl Ranger (allegedly) acted as a courier for one of the distribution networks,” Lapointe said.

Ranger faces charges of breach of trust, credit card fraud as well as trafficking in methamphetamine and cocaine. During the investigation, led by the Escouade nationale de répression contre le crime organisé (ENRCO), police seized 21 kilograms of cocaine, more than $2 million, bulletproof vests and 34 firearms. Members of the recently formed squad also raided the clubhouse of the Hells Angels’s South Chapter, something that had not been done since 2009.

The arrests came after five months of raids targeting Montreal’s North and South Shores that saw the seizure of evidence aimed at breaking a drug trafficking network allegedly linked to the biker gang.

Michel (Sky) Langlois, a founding member of the Hells Angels Montreal chapter, was among those taken into custody in an operation police say could see “dozens” of suspects arrested before its completion.

Langlois was among the first men to become part of the Hells Angels in Canada when, in 1977, the biker gang opened a chapter in Sorel. Its members wore patches designating Montreal as its territory.
Langlois, who got his nickname from being a pilot, is currently a member of the gang’s South chapter and is alleged to have run a drug trafficking network based in the Outaouais region. He faces charges of committing a crime for the profit of a criminal organization (or gangsterism) as well as trafficking in cocaine, marijuana and methamphetamine.

Another Hells Angel targeted in the arrest warrants carried out on Tuesday is Stéphane Maheu, 47, another member of the gang’s South chapter. He is alleged to have controlled a drug distribution network based in the Eastern Townships in municipalities like Cowansville and Granby. Maheu began his association with the Hells Angels during the 1990s as a member of the Evil Ones, an affiliate gang based in Granby.

ENRCO officers were unable to locate Maheu and, according to court documents, he frequently visits the Dominican Republic where he has operated a diving school in the past. He was among the many Hells Angels arrested in Operation SharQc, in 2009, when the Sûreté du Québec rounded up almost every member of the biker gang based in Quebec and alleged they were all part of a murder conspiracy that ran between 1994 and 2002.

Maheu pleaded guilty to being part of the conspiracy and was sentenced to an overall prison term of 18 years. He later managed to have the time he had left to serve reduced to three years through an appeal.