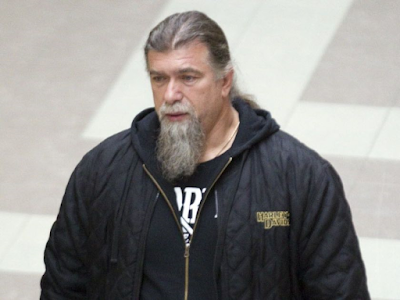 The alleged biker gang leader claims prosecutors and cops held back key information during his bail hearing. An alleged leader among the Hells Angels in Quebec has filed a lawsuit against the attorney general of Quebec, seeking more than $2 million while alleging he was detained without cause following his arrest in a major drug-trafficking case. He alleges prosecutors and police held back key evidence during his bail hearing.

The lawsuit filed at the Montreal courthouse by Salvatore Cazzetta, 63, an alleged member of the Hells Angels since roughly 2004, involves a case in which he and 20 other people were charged in November 2015 with a series of criminal offences related to drug trafficking in the Mercier—Hochelaga—Maisonneuve borough. Besides being an alleged Hells Angels leader, Cazzetta has been observed meeting with several people tied to the Montreal Mafia in recent years.
Two police investigators and three prosecutors are also named in the lawsuit.

At least 15 people have since pleaded guilty to some of the charges in the drug-trafficking case, but Cazzetta challenged the case brought against him. Two charges were tossed out following his preliminary inquiry and, on Dec. 6, the prosecution announced it would no longer prosecute him on the last remaining charge — that he was in possession of the proceeds of crime by having collected “a tax” from the drug-trafficking ring.

In the lawsuit, prepared by Montreal lawyer David Summerside, Cazzetta argues he was denied bail and detained — between November 2015 and August 2017 — without cause because the police investigators and prosecutors did not reveal evidence that was dropped in their laps shortly after Cazzetta and the other men were arrested.

The leader of the drug-trafficking network was arrested on Nov. 19, 2015, and decided to co-operate with the police immediately. Within hours of his arrest, he provided a sworn statement, recorded on videotape, and eventually was given a contract to work as a witness for the prosecution. According to the lawsuit, the witness told the police that Cazzetta “had nothing to do with Hochelaga—Maisonneuve” and that Cazzetta had nothing to do with his drug-trafficking network.

Four days later, a Quebec Court judge began hearing evidence in Cazzetta’s bail hearing, but the statement the witness gave to police was not mentioned.

One of the investigators named in the lawsuit was present when the leader of the drug-trafficking network provided his sworn statement to police. She participated in the preparation of a PowerPoint presentation used during the bail hearing and testified during it, but made no mention of what she had heard a few days earlier.
﻿
Because of this, Cazzetta argues, the investigators and prosecutors “did not act in good faith, rigour and the honesty required” by people involved in the justice system. By being detained for more than a year, he alleges, he was “exposed to a high level of stress anguish, anxiety and insecurity.” As part of that same argument, Cazzetta notes that, as was revealed during his bail hearing, shortly before his arrest he had undergone surgery on his heart and was supposed to be convalescing.

People who have been convicted in the same case have received sentences that range from a 43-month prison term to sentences that could be served in the community. At least four of the 21 men who have pleaded guilty still await their sentence. That includes François Langlois, 43, a man who pleaded guilty, on June 20, to conspiracy and drug-trafficking charges, but according to court records, he has failed to show up in court for the sentencing stage of his case since January.