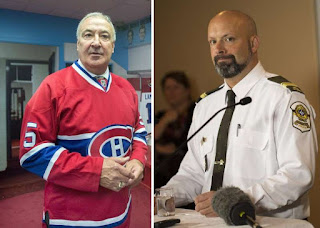 The Toronto Star is reporting that "Quebec police say they are investigating after hockey legend Guy Lapointe was threatened by Quebec Hells Angels amid a national rise in tensions in the outlaw biker world. According to Quebec media reports, the Hells Angels motorcycle gang threatened the lives of Insp. Guy Lapointe of the Sûreté du Québec, a provincial police spokesperson on outlaw bikers, and his father, Guy Lapointe Sr., 70, earlier this week."

"The senior Lapointe is a member of the Hockey Hall of Fame starred for the Montreal Canadiens in the 1970s as a defenceman, winning six Stanley Cups. The junior Lapointe has cut a high profile in the Quebec media as a spokesperson on biker issues." "Insp. Lapointe in April told a news conference that police had “dismantled three of the biggest drug trafficking networks in Quebec,” referring to the Hells Angels’ Montreal, South and Trois-Rivières charters."

In Quebec the police instigate the Hells Angels connection to drug trafficking. In BC they don't. In BC the police just send out press releases and do photo ops at Hells Angels parties. After the Kelowna Summer Jam in 2012 the BC Gang Task Force stopped investigating the Hells Angels. That's when Rich Coleman and the BC Liberals disbanded the OMGU.

The New York Model was made possible by the Mollen Commission in 1992 which investigated police corruption and found Michael Dowd. Police Corruption Documentary: The Seven Five