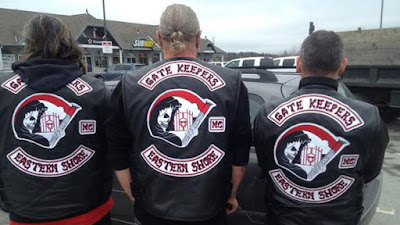 CBC is reporting that "Nova Scotia RCMP have charged three men in connection with a serious assault on another man two years ago inside the former Gate Keepers biker gang clubhouse in New Glasgow. On June 7, 2016, Inverness District RCMP responded to a call after a man was found severely injured in a parked pickup truck on the side of Highway 105 in Glendale. The man was airlifted to hospital in critical condition."

"RCMP allege the man was assaulted inside the clubhouse about 130 kilometres away from Glendale and then transported to the pickup truck and left on the side of the highway. Three Nova Scotia men face charges of aggravated assault, forcible confinement, conspiracy to commit an indictable offence and accessory after the fact: Donald Melbourn Messenger, 48, of Broughton. William Jeffrey Giles, 45, of Pictou County. Charles Jardine Hayman, 49, of New Glasgow."

Gate Keepers are affiliated with the Hells Angels.