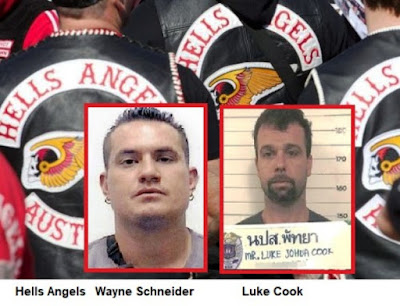 The former kickboxer was the bodyguard of Mr Schneider, who was kidnapped and bludgeoned to death (link is external) near the resort town of Pattaya.


A staff member at Bangkwang Prison, where Bagnato is being held, told the ABC that he would be released on Friday.
"Yes, there is [a] court order to release him," said the official, who did not give his name.


"He has a pending charge and will not walk out — police will come to take him from prison to police station," the prison official told the ABC.

The brutal murder of the bikie boss is believed to be linked to a wider criminal network smuggling methamphetamines from Thailand to Australia (link is external).

Last month Cook and his Thai partner Kanyarat Wechapitak were sentenced to the death penalty (link is external) for smuggling 500 kilograms of crystal methamphetamine, also known as ice.

The Bangkok Post quoted Police Lieutenant General Sommai Kongwisaisuk as saying the couple bought the drugs from a Chinese supplier in international waters and stored it aboard a boat.

Police said that while the boat was heading back to shore in the Sattahip district of Chon Buri province, they encountered a patrol boat and dropped the drugs into the sea before escaping.

More than 50 kilograms of ice later washed ashore at a beach in Rayong.
American Tyler Gerard was also convicted of being involved in the smuggling plot and was last month sentenced to death.

Gerard previously stood trial alongside Bagnato and received a three-year sentence for deprivation of liberty and helping to dispose of Wayne Schneider's body (link is external).

Thai police used the GPS tracker on a rented vehicle used in the crime to identify the gravesite.