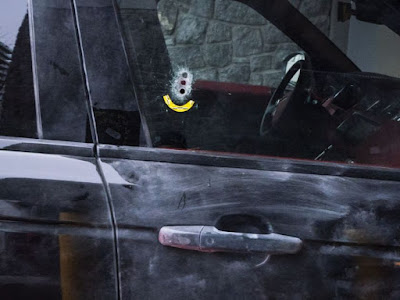 Global is reporting that "The Integrated Homicide Investigation Team (IHIT) has been called to a North Vancouver residential building following a fatal shooting on Christmas night. One person is dead and another injured after a shooting in the 600-block of Seylynn Crescent near Keith Road and Mountain Highway at about 7:30 p.m. The building was on lockdown for a couple of hours, as dozens of police officers and a K-9 unit entered the building. Witnesses say they saw two men being escorted outside the building by police with guns drawn."

The Vancouver Sun is reporting that "Three bullet holes are seen in the passenger window of a black Range Rover while it is removed from the parkade of the Compass condo at 680 Seylynn Crescent where a shooting occurred in the parkade of the building in North Vancouver, BC, December, 25th 2018." A shooting on Christmas day? Idiots.

CTV is reporting that the victim in the fatal Christmas Day shooting was 25 year old Rock Habib-Joumaa. He is known to the police but does not have a criminal record, and the police believe the shooting was targeted. The North Shore News is reporting that "This is the second gang hit to occur within the same development. On Dec. 22, 2017, gang associate Gavinder Grewal was shot and killed in his rented penthouse on the property."