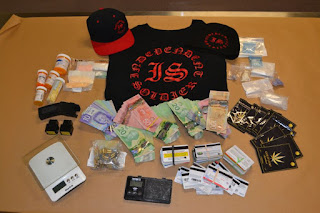 The Kelowna Now is reporting that "On Wednesday, RCMP executed the search warrant in the 500 Block of Valley Rd, Kelowna, where they seized fentanyl, crack cocaine, heroin, meth, over a 100 various pills as well as numerous stolen credit cards and passports. A 32-year-old male and noted member of the Independent Soldiers Gang was arrested along with a 44-year-old male associate." Bloody hell, other than Jody York, who's left? Blaze is in Boston.

As we all know the Kelowna Independent Soldiers sell drugs for the Kelowna Hells Angels and thanks to David Giles we now know that drug trafficking was approved by the local executive.

Global is reporting that the investigation “uncovered a conduit of drugs being trafficked throughout the Okanagan Valley and directly to some of Kelowna’s most vulnerable persons associated to a support shelter in Kelowna.” Dirty deeds done dirt cheap.