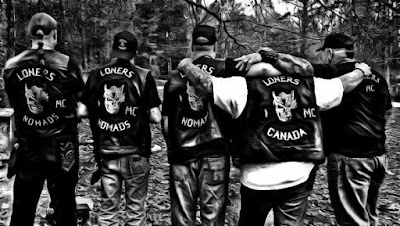 We are responding to the article Concerns over possible outlaw motorcycle club in Cornwall's Le Village published January 25th 2019 in the Cornwall Standard-Freeholder. The article is also being shared among many of the motorcycle sites and club sites and throughout Facebook and the internet.

Our response to the article will also be shared word for word not only locally, but most likely worldwide. The article is meant really to judge us but in reality the audience will also judge you and the integrity of your paper.

We haven't commented on the article as of yet, but many are already viewing the article as a conspiracy with the local PD to gather Club intelligence to scare the community into believing there is a security risk. This is seen as an attempt to increase the Police budget by robbing the municipal coffers for an imaginary Biker issue. You may believe that they are reporting the facts but it appears that their sources have been biased.

Personally I would hope the audience doesn't judge either way until they have all the facts.

The Loners Motorcycle Club honours and respects our Club Founders for maintaining our old school values and love for motorcycling since 1978. Their integrity and loyalty to the club, its members and the respect that they have shown throughout the motorcycle world has enabled us to build a brotherhood like no other worldwide, not just in Cornwall.

The history of the club can be found on line with a simple Google search. The extent of the information is minimal for a reason. In the history of the club we have never been deemed or labeled as an outlaw MC. Nor have we been found to be involved in organized crime, charged with the same or have charges pending. Our members are employed. We have cabinet makers, brick layers, cement foreman, bouncers and security staff, car mechanics, bike mechanics, truck drivers, plant workers, sales people, store owners, business owners and the list goes on. Some of our members are also athletes and are involved in boxing, martial arts, MMA, body building at a competitive level and are non drinkers and smokers. Many have post secondary education.

To become a full patch member and finish the probationary period it takes a minimum 2 years but can take much longer. All members must be well versed in, and must defend, the Canadian Constitution and it's Charter of Rights and Freedoms. All members must also strictly adhere to the Loners MC Constitution. Nowhere in our Constitution does it allow or support the use of narcotics or the sale of the same. The life style of a 1% MC is much stricter then you can imagine and is not for everyone. It's well known in our world that it is harder to keep your patch than it is to get it.


On the first line of your article you suggest that we are an outlaw motorcycle club. That's incorrect. You stated that we opened quietly, implying that we intentionally wanted to stay under the radar.

That's incorrect. We rented a space just like any other tenant. We have been here for over a year. The picture on your article is from a Police file. We can date the picture back to last summer. We know this because the owner of that Bike was a member and released from the Club for not following our Constitution. That was last summer, but we are in the later part of January.

The story is supposed to be about the tenant that had an issue with us. In that case, they should have had a picture of the door behind the bike. That door leads to the issue surrounding the complaint and the presented reason for your article.

The information they reported regarding 1% Motorcycle Clubs was supplied to The Cornwall Standard Freeholder by the Cornwall Police and they looked no further than that to find the truth. The truth is far less weaker than a tainted brush. Any information they need about 1% Biker Culture can be found on line including the history of the 1% lifestyle. The description of what a 1%er is depends on the author writing it. However, the AMA, American Motorcycle Association, has a description, Wikipedia has a description and even Honda used this for advertising in the fifties. There is more old school information on this topic that it's hard to get through it all. All the research material is available. It's only the Policing agencies that have changed the 1% true meaning definition to fit their needs. To the Policing community 1% means $$$$ dollars. At the end of your research you truly will not understand. There really is only one way to know. If I attempted to explain you wouldn't understand.

The policing community has also interpreted what they believe to be the 1% culture. It's used as propaganda to achieve millions of dollars in funding a year. However, the description they give to explain what a 1% club is, they themselves would fall under that same label.

The Cornwall Police follow the same agenda as other forces. What they are attempting to say to the public is all 1% motorcycle club members are criminals. They wear a patch and clothing similar to a uniform, they wear a 1% symbol much like a badge. They are intimidating to the public. They like to refer to us as a gang. We as club members believe many Police agencies fall under the same description as they give for 1% clubs. 1% clubs now refer to Policing agencies as Police gangs as a result. Simply go on line and Google Police officer charged. Go by County from Kingston to Cornwall. Start with Leeds and Grenville County. Once you're done with that and after doing the same with the Loners MC, let me know who best matches the description of a gang.

In simple terms, a private landlord tenant issue was used to bring to light to the community that there is a 1% club in town. The truth and reality is the rental space above us was vacated for reasons other than us and we were used to break a lease. The only issue the tenant ever had with us is the door you
see in the picture. Sometimes it was blocked by us and we would rectify the situation ASAP. We actually had good communication with him.

The truth is his attendance at the store was sporadic to say the least. His used furniture was big and bulky and from the 40's - 80's era. Simply not the trend. My guess is he could have had difficulty paying rent. We always pay our rent and if we are able, we pay before the due date.

I met with both Wolff and his wife very recently. We as a Club have the utmost respect for Wolff. He is stern, respectful and has a good heart. We would without hesitation, help and support him and his wife if ever they needed it. He's a smart and talented man that has gained our respect because he has treated us with the same respect. During our conversation we discussed ways to deal with some of the issues. They are issues any landlord or tenant may run into when leasing. We will certainly hold up our end and be happy to do it. We feel bad for the pressure the Police have applied to have us evicted but also applaud Wolff for standing his ground.

However, we won't allow the pressure to continue to where it affects Wolff. He really doesn't need the headache or the money. We will simply stay as long as he wants us. We wouldn't put ourselves in the same situation as we also have invested a lot of money and time into the space. Should this fail we will simply look at purchasing something rather than deal with continuous landlord issues prompted by the City Police, newspaper or whomever else.

What is even more ironic is the article states we quietly move in. In actual fact, most of our members in Cornwall are from the area and most grew up here. They have always been involved in bike culture. They have always been a part of the community. The only real difference is they aren't hanging outside Tim Horton's after their ride. They're at the club house.

I'm not a clown and will not sit down for an interview which we would describe as an intelligence gathering mission. During your investigation for this story you interviewed some of our neighbours. We are extremely thorough and we were doing the same. We were told not only were they questioned but pressured to give you anything saying 'There must have been something negative or you must know somebody that has.'

I would think a career as an investigative reporter would be rewarding. Actually having the ability to find the untainted truth. To report the facts, turn over all the stones and find the true story. Having the integrity and loyalty to yourself and your profession and your audience to speak the truth with accuracy.

Simply, if you lost your way or not and are doing anything less, than really you are just acting as an agent for the Crown and a pawn in the world of biker propaganda.

Here is my proposal to you. If you truly want to learn the true meaning of 1% and truly want to understand Biker Culture and write an accurate story of what you see with your own eyes not what someone wants to feed you to benefit their agenda, this is what we will do for you and consider this your interview.

We will purchase you all the safety equipment you require including an approved helmet, a leather jacket, boots, gloves and sun glasses. If you ride but don't have a Harley, I will lend you my forty thousand dollar machine. If you're not comfortable with that you can ride on the bike with me. That itself goes against our constitution so I will have to get special permission from our World Council.

The trip I'm talking about is around 1,100 KM and we start early in the morning and will return the same day. During that time period you will learn about our culture, behaviour, what the 1% world is really all about. Any reporter truly interested in motorcycle culture and the true story behind clubs would find this to be an opportunity of a life time.