Al Potter had plans to open his own motorcycle club in central Newfoundland, with six solid members who were serious about following the rules and paying their dues — something he said some members of the Vikings often failed to do.

That and details about Potter's family's private island were revealed in a conversation Potter had with an undercover police officer while they drove from Minden to Belmont, Ont., on Sept. 25, 2016.
Little did Potter know, he was one day away from being arrested for the 2014 stabbing death of Dale Porter, and he was getting comfortable in the passenger's seat as the two men drove to do a "small job."
"So the plan is … take the vest, and start my own chapter out there, in central Newfoundland," he told the undercover officer.
"And from then, patch that Vikings chapter to the Hells Angels chapter." 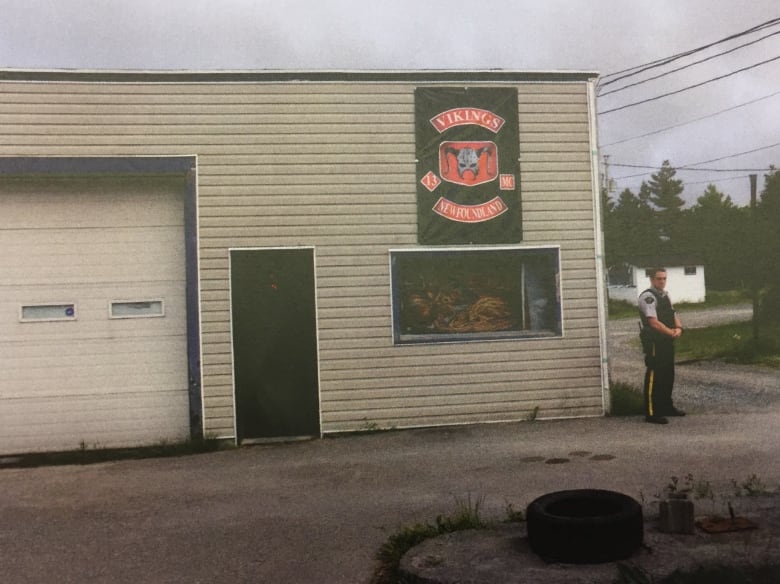 The RCMP gained access to the Vikings Motorcycle clubhouse in Cupids, Conception Bay North, on July 5, 2016 — about a week after Porter's death. (Court photograph)

Potter, wearing a red T-shirt, sat next to the officer, who wore a black shirt with an two guns on the front.

He told the officer he planned on taking four of the "best from what's there" in the Vikings chapter in St. John's, along with himself and a man he met in jail in Lindsay, to start a new chapter that would be sandwiched between two Outlaw motorcycle clubs.

One of the St. John's members he wanted to bring along was a man who was secretly working with police, recording conversations and leaking information to bolster the RCMP's case in the Porter homicide.
"It's going to be the top notch guys, select few, the best chapter, you know what I mean?" Potter said.
"Not a bunch of f--king yahoos who can't pay their $30 a month in f--king dues … riding f--king Honda 250s."

He also claimed he was once a member of Satan's Choice MC, an outlaw club that operated in Toronto and Montreal.

An invitation to Samson's Island

During the hour-long conversation, Potter also offered the man an invitation to Samson's Island, a piece of land that Potter's family owns in Newfoundland.
"We got our own island, man. Twenty miles out in the North Atlantic. Nobody there to bug you," Potter said.


The sunsets are breathtaking; the icebergs are floating past you.

He explained it's equipped with the satellite dish, solar panels and a windmill "almost as tall as this f--king spiked thing here, tower."
"It sounds pretty nice," the officer responded, the video now near black as darkness fell.
"The sunsets are breathtaking. The icebergs are floating past you," said Potter.

He explained he came from a wealthy family and that "one of the deals that I've got worked in with this thing, with my father's company, is that you guys can kill my ass, give me $5,000,000, keep the rest but I want Newfoundland, and everything in it."
"You can keep your $100,000,000. Just give me Samson's Island."

Potter was arrested outside a hotel in London, Ont., the next day, shortly after a conversation with the same undercover officer.

While the jury has been told the conversation was not recorded, details of it have not yet been revealed.