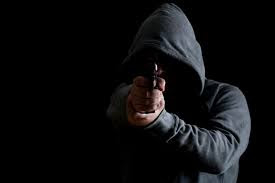 Investigators have identified a 32-year-old man who was shot to death in the parking lot of a commercial plaza in Mississauga on Monday morning.

Peel Regional Police said the victim was shot in the parking lot of a plaza on Dundas Street East and Cawthra Road at about 11:15 a.m., in view of a number of people who were working out at a nearby boxing gym.

Emergency crews arrived to find a man suffering from a single gunshot wound. He was rushed to a hospital trauma centre where he was later pronounced dead.

On Wednesday, police identified the victim as Michael Deabaitua-Schulde of Mississauga.
Investigators say Deabaitua-Schulde was a "full patch" member of the Hells Angels. Witnesses told police two men wearing dark hoodies were seen fleeing the area after the incident.

Investigators later located a blue Honda Civic on fire in the area of Rymal and Tomken roads.

Police believe the vehicle was connected to the shooting incident.