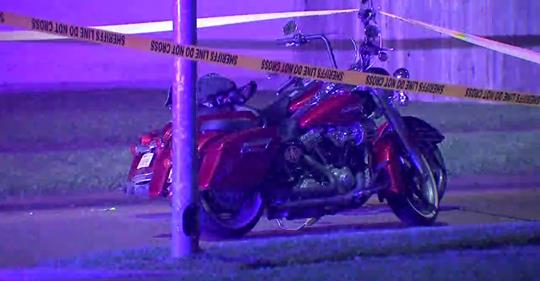 HOUSTON, Texas (KTRK) -- Deputies are searching for the shooters who shot two veterans on motorcycles in west Harris County.

Authorities say an SUV hit the veterans, who were riding motorcycles on Barkers Crossing near Sable Tree around 1 a.m.

The gold SUV, which had several people inside, started following the three motorcycles.

When the motorcyclists made a turn, the SUV sped around and hit one of the riders, knocking them off their bike.

"As they made a turn, the SUV sped by and struck one of the riders off his bike and ran over a second motorcyclist. At that point, people jumped out of the SUV and began shooting," Harris County Sheriff's Office Cpt. John Shannon said.

Two people were transported to the hospital. They're expected to be okay.

Deputies say the third rider was taken in for questioning.