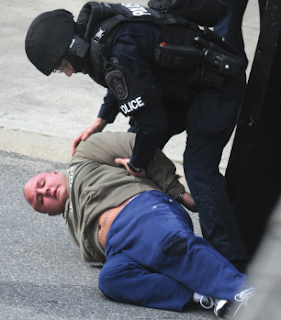 "A former drug trafficking associate of Jamie Bacon testified Monday that he thought Bacon would forgive a $20,000 debt “if I killed someone for him.” The man, who can only be identified as CD due to a publication ban, admitted that he attempted to murder Bacon’s former pal Dennis Karbovanec on Dec. 31, 2008. “I tried to kill him,” CD told jurors and B.C. Supreme Court Justice Catherine Wedge after identifying Karbovanec in a photo. “I tried to shoot him.” When prosecutor Joe Bellows asked why, CD said: “Because I owed Jamie Bacon a debt of money and I was told that if I killed Dennis the debt would be erased.”

Now that is believable. It is common for HA trash to impose a manufactured debt on someone then tell them that debt would be forgiven if they did a hit for them. That is why Joey Verma killed Brittney Irving. The Kelowna chapter placed a manufactured debt on Joey and told him the debt would be forgiven if he killed Brittney. Blaze was there to make sure the job got done. That's why Joey later said he *had* to do it. The HAs told Jamie Bacon to use the same ploy on CD.

Interesting to note that the associate Jamie Bacon assigned the murder of DK to had a past criminal history with the Haney Hells Angels. He was a Bacon brother associate working with the Haney Hells Angels. This confirms my previous statements that Spike's niece's presence at Larry Amero and Jonathon Bacon's coming out party in Kelowna was not a coincidence nor was she doing something against the will of her uncle. Her presence there was to publicly show that the Haney Hells Angels were backing the Bacon brothers not just Larry Amero. It was a complete tragedy that she was shot and paralyzed. That's something Spike has to live with.
I don't have beef with the Haney chapter anymore. What's done is done. That's past history now. I don't have a problem with Jesse. Tara is obviously trying to make a go of it and I support that completely. Jesse wasn't involved with Piggy's Palace. That was someone else. The Hardside chapter however, is something I don't even recognize. The Brothers Keepers have more credibility than the Softside ever will. They should answer to Haney not the Softside.