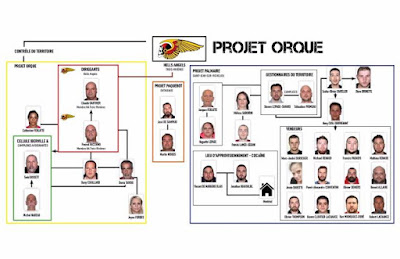 "Police forces in Quebec arrested 33 people Wednesday in relation to an alleged drug network extending from Montreal to Outaouais, Centre-du-Québec, the Montérégie and more. A total of 37 searches were carried out, and police say nearly two kilograms of cocaine and 27,100 methamphetamine pills were seized as part of Operation Orca."

"Officers say they also seized 23 vehicles, $120,000, four firearms, six jackets in the colours of the Hells Angels and an escutcheon. Two of those arrested were Claude Gauthier and Pascal Facchino, identified by authorities as part of the Angels’ Trois-Rivières chapter, alleged to be leaders in the sale of narcotics in the Saint-Jean-sur-Richelieu region."

The Montreal Gazette is reporting that "Called Escouade nationale de répression contre le crime organisé or ENRCO, the task force has most recently been targeting the leaders of criminal organizations including the Hells Angels. It is composed of officers from the Sûreté du Québec as well the Montréal, Quebec City, Laval and Lévis police forces. Wednesday’s arrests targeted drug networks allegedly overseen by the Hells Angels. The Sûreté du Québec is expected to provide more information on the raids later on Wednesday."

This is the difference between BC and Quebec. Quebec has a task force to investigate organized crime, BC doesn't. Quebec targets drug trafficking, BC doesn't. That is the root of the problem.