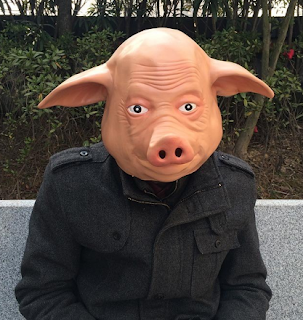 CBC is reporting that "A mistrial was declared Saturday in the murder plot case involving Jamie Bacon, according to the B.C. Prosecution Service. Bacon was charged in 2014 with counselling an associate to commit murder. He is accused of counselling others to kill Denis Karbovanec, who was shot, but not killed in Mission on Dec. 31, 2008. Crown spokesperson Daniel McLaughlin said the decision was made late in the day after the jury advised the court that they weren't able to reach a verdict following a three-month long trial. A mistrial, which is ordered at the discretion of the trial judge can occur where a trial has the appearance of unfairness. A new trial will take place and McLaughlin said the next appearance in the case will be June 14."

AYFKM? The jury couldn't figure it out? Wow. Holy injustice Batman. Global is reporting that "B.C. Supreme Court Justice Catherine Wedge ordered the jury to continue talking after they came to her without a decision Saturday afternoon, but no progress was made after that."

"The court heard Bacon and Karbovanec were longtime friends and associates in the drug trade, but that Bacon had begun to question Karbovanec’s focus on their operation. The shooter — who can only be identified as “CD” due to a sweeping publication ban — testified Bacon ordered the hit to erase CD’s $20,000 drug debt. A second witness identified only as “AB” testified he lured Karbovonec to a Mission cul-de-sac, but CD’s gun jammed. Karbovonec fled, but was hit in the back and a bullet grazed his face. He managed to survive his injuries."

"Both CD and AB have escaped prosecution by agreeing to testify against Bacon, despite admitting to their roles in the shooting. Defence argued those immunity deals were precisely why their testimony couldn’t be relied on, telling the court Bacon was only being used as an excuse to reduce the witnesses’ responsibility. Lawyer Kevin Drolet told the court during closing arguments Wednesday that there was never any plan to murder Karbovonec, arguing the shooting was too inept to be coordinated by anyone." AYFKM? This isn't brain surgery.

Jamie Bacon getting off for the Surrey six murder due to trial delays over police misconduct was obscene. Now this. Wow. That is insane. The whole plot falls well within the realm of believability. It makes sense. The jury deadlock does not. There is not a snowball's chance in Hell the two losers would have shot DK without Jamie Bacon's order. This deadlock is really offensive.

In the Surrey Six, Person Y testified that Jamie Bacon ordered the hit on Cory Lal. Global reported that “Mr. Johnston and Mr. Haevischer, both 30, claimed at trial that the plan was to rob Corey Lal, a drug-dealing rival of their gang, the Red Scorpions, but Justice Wedge found the story implausible."

No kidding. Just like Jamie Bacon’s claim that there was no plan to shoot DK. The two loser shooters would not have shot him if Jamie Bacon had not ordered them to. They worked for Jamie Bacon. The jury failed to put that ridiculous claim to the test of beleivebailty.