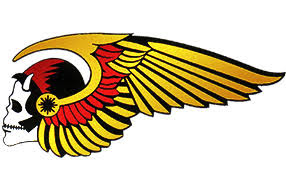 Sixty-two years ago, Angels Camp became a part of history not associated with the region’s famous Gold Rush.

In 1957, the outlaw motorcycle gang Hell’s Angels descended on the City of Angels to create their unique brand of mayhem.

Not all those who served in World War II were excited about returning to civilian life. Some young men who fought in the conflict returned home still searching for the excitement of the war years.

Many found it atop a motorcycle. Surplus motorcycles from the war effort were inexpensive and readily available. Bikers began to form clubs across the country, re-establishing the camaraderie they had experienced overseas back home.

While there were less than 200,000 motorcycles in the United States at the end of the war, by the mid-1950s, they numbered over 1 million.

For many, riding motorcycles was a weekend release from a 9-to-5 job. For others, it became a way of life that shunned social constraints and scoffed at the law.

Outlaw motorcycle clubs first came into public consciousness in 1947 during the annual meeting of the American Motorcycle Association (AMA) in Hollister.

The meeting drew thousands of motorcyclists from across the country, including members of burgeoning outlaw biker clubs.

Not content to compete in the official events, members of the Pissed Off Bastards, a club from Bloomington, began racing down Main Street and destroying property. Many were arrested, and the local police chief was quoted as saying, “It’s just one hell of a mess.”

In 1948, members of the Pissed Off Bastards split from the club to form the Hell’s Angels in Fontana, which would go on to become the most notorious outlaw biker club in the world.

Ten years after the mishap in Hollister, members of outlaw motorcycle clubs, including the Hell’s Angels, bombarded the quiet community of Angels Camp.

This picture from the front page of the Calaveras Californian on June 6, 1957, shows a motorcyclist being arrested by the California Highway Patrol on Main Street in Angels Camp, while the American Motorcyclist Association’s Gypsy Tour took place at Frogtown.
Courtesy photo

From June 1-2, 1957, the AMA held its annual Gypsy Tour at the fairgrounds outside of town.
The Calaveras Californian, a local newspaper based in Angels Camp, covered the event and the resulting disturbance.
“Angels Camp back to normal after two-day cycle meet,” read the headline for June 6. “Rumors of local ‘state of siege’ widespread; crashes cause deaths of three motorcyclists.”

Since the mishap in Hollister, the AMA had begun banning outlaw groups from attending its events.
However, this didn’t stop groups like the Hell’s Angels from coming to town. Barred from the main event at Frogtown, they set up shop on Main Street in Angels Camp.
“It was true that for a time Saturday afternoon a band from ‘outlaw’ motorcycle clubs did take over on Main Street here, staging drag races down the middle of the street before police reinforcements were called in, and citizens seem pretty well agreed that if this help had not been forthcoming, a fracas of riot proportions might have ensued,” reported the publication.

On Saturday afternoon, Angels Police Chief Joe Spinelli suspected a buildup of outlaw elements on Main Street. Large numbers of bikers began to park downtown and race their bikes up and down the street.

In response, Spinelli was forced to call in 15 special officers from Stockton and 30 California Highway Patrol officers for assistance.

Roadblocks were set up to halt the incoming flood of motorcyclists, while a crew from the chamber of commerce began clearing away the empty bottles that littered Main Street, which they believed could be used as weapons if a fight broke out.

Unexpectedly, no major fights were reported, no bottles were thrown, no property was damaged, and the officers were able to quell the disturbance.

The parade planned for that evening on Main Street was relocated to the fairgrounds, and a roadblock was maintained along Highway 49 to separate AMA members from the outlaw biker groups.

Three motorcyclists were killed in connection with the event. According to longtime Hell’s Angels leader Ralph “Sonny” Barger, two of those killed were Hell’s Angels.

In his autobiographical history of the group, Barger wrote, “We were down in the small town of Angels Camp … to visit an AMA gypsy tour road rally. While over 3,700 riders joined in this AMA-sanctioned event, we were considered a disruption.
“During the gypsy tour, two Sacramento Hell’s Angels raced out of town at speeds of over 100 mph.

As they crested the top of a hill, their bikes sailed in the air, crashing down on a pack of riders coming up the hill. Both Sacto members were killed, and the accident scene was pretty ugly.
“The AMA wore a big black eye after the papers wrote about it, and they decided to (cancel) any such future events. Oddly enough, while the AMA looked bad, the publicity sparked even more enmity toward the Hell’s Angels from the straight world.”

Mark Twain Hospital reported treating 17 motorcycle accident victims over the weekend.
Three taverns and one restaurant on Main Street closed in response to the presence of outlaw bikers, but the rest remained opened. Taverns and restaurants in Angels Camp and Altaville that stayed open all reported doing record-breaking business.

The story of the takeover of downtown was printed in publications across the county, further solidifying the notoriety of the Hell’s Angels.

The week after reporting on the disturbance on Main Street, the Calaveras Californian printed a letter from Tommy Castle, a former Angels Camp resident who had moved to New York.

Castle had read about the events on Main Street 3,000 miles away in The New York Times.
“Almost choked over my breakfast when I read this article,” he wrote. Castle included a clipping of the local article.
“Daredevil elements in a group of 3,700 motorcyclists roared into this tiny village in the foothills of the Sierra Nevada yesterday, and overwhelmed the local two-man police force,” the article read. “With the aid of 48 law enforcement officials, order was restored before midnight.”

Although the details in The Times article were exaggerated and misleading, it did admit that, “Except for hundreds of beer bottles and cans littering Main Street, no damage was done during the disturbance here.”

In response, the editor wrote, “Thanks, Tommy. It is interesting to see how far and wide the name of Angels Camp travels – even on motorcycles.”