Posted by MC & Gjengkriminalitet September 17, 2019
The Pittsburgh police detective caught on video last year punching a defenseless member of the Pagans motorcycle club 19 times in the face during a melee at Kopy’s Bar (link is external) has sued the South Side tavern in federal court as well as the man he repeatedly struck.

Filed Sept. 5 by Detective David Lincoln and his wife, Deborah Siwik, the countersuit offers the most extensive details to date about what led up to the battle royal. Information until now has been vague about what exactly the detectives were doing in the bar on South 12th Street and their perspective on why the wild brawl with four Pagans erupted.

Detective Lincoln and Ms. Siwik are accusing Pagans Frank DeLuca and Michael Zokaites of assault and battery, negligence, intentional infliction of emotional distress, conspiracy and loss of consortium. They are also making some of the same legal claims against Kopy’s, accusing the bar of not providing security and not taking proactive measures to oust the Pagans before violence broke out.

In addition to documenting injuries he sustained in the fight, Detective Lincoln says he was put on administrative leave and lost money as a result of the incident. He and his wife are asking for damages of more than $75,000. All four officers are back on the job, but city officials have refused to say where they have been reassigned (link is external) and whether they will be returned to patrol. 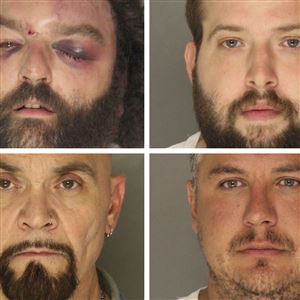 The lawsuit does not reference any imbibing of alcohol by Detective Lincoln or his partners. The bar owner and lawyers for the Pagans have accused the narcotics detectives of drinking for hours at Kopy’s before getting into the fight that was captured on video.
“I think they are trying hard to stay away from any spotlight on their conduct,” George R. Farneth II, Kopy’s attorney, said Friday. “I suspect that part of the reason they were reassigned involves their conduct that night and potentially the violation of certain rules whether written or unwritten in the department.”

Mr. Farneth called the allegations in the lawsuit “meritless.”
“I’m wondering why he didn’t name his co-officers as defendants because they were part and parcel and the impetus behind the brawl in the first place,” Mr. Farneth said.

The detectives said they were doing undercover work; the Pagans claimed that the police officers started the fight after drinking all evening and then hauled them to jail on false charges.

The mayhem spawned multiple investigations — the officers were cleared of excessive force, and charges against the Pagans were dropped — and federal lawsuits. In one suit, Mr. DeLuca said Detective Brian Burgunder held him by his hair and arms while Detectives Lincoln and David Honick punched him, and a uniformed officer who came to assist sprayed him with pepper spray.

Attorneys for Mr. DeLuca and Mr. Zokaites could not be reached for comment. 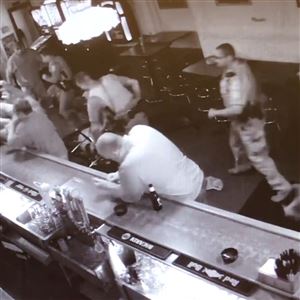 In the new countersuit, the plaintiffs said Detective Lincoln was assigned Oct. 11 — the eve of the brawl — to conduct surveillance of a man identified as a “known drug dealer” who was “believed to be working out of Kopy’s Bar.”

The man, who is named in the suit, was not one of the four Pagans charged in the fight.
Detective Lincoln and his partners — Detectives Burgunder, Honick and Brian Martin — posed as construction workers. They set up shop immediately inside the entrance of the bar, which the suit described as a place that “permitted and encouraged” the Pagans to hang out. The Pagans are described in the suit as “a recognized criminal organization.”

Both groups kept their distance until Detective Honick asked the two Pagans about a member of their club from McKeesport. Two minutes later, three more Pagans came in, prompting Detective Honick to ask them about the McKeesport man.

The suit describes the conversations as “non-threatening and non-confrontational” and claims they did not jeopardize the officers’ cover as construction workers.

Nevertheless, just after midnight on Oct. 12, it appeared their cover was blown. A woman came in who recognized Detective Honick, the suit said, and the Pagans started staring at the officers, talking with each other and gesturing toward them.

Uncertain about their status, Detective Burgunder called his sergeant to warn him that they might have been made. A short time later, Detective Martin approached the Pagans “and engaged in small talk in an attempt to determine definitively whether their cover had been compromised,” the suit said.

After a “cordial” chat ending in handshakes, Detective Martin felt that their cover was indeed blown.

The officers decided honesty was best, and Detective Martin again went up to the Pagans and revealed the officers’ true identities, the suit said.

He told the Pagans “that the detectives were not at Kopy’s Bar for any reason related to the Pagans; that is, the Pagans were not the subject of the undercover operation,” according to the suit.

Two men identified in the suit as Pagans — neither of whom was involved in the fight -— left, but not before they “made eye contact with the police detectives and waved goodbye.”

Mr. DeLuca and Mr. Zokaites also left but quickly returned.
“Concerned with the behavior of the Pagans, who are known to engage in ambush tactics, Martin again approached Zokaites to inquire as to the Pagans’ behavior,” the suit said.

Detective Burgunder called for backup. Mr. DeLuca and Mr. Zokaites came up to the detectives then and “escalated” the situation, the suit claimed. Mr. DeLuca poked Detective Honick in the chest, the police backup arrived and then everything went haywire.

Mr. DeLuca “lunged at Honick’s neck,” a fight broke out and officers spotted a gun on Mr. DeLuca, the suit said. Mr. Zokaites yelled, “ ‘War,’ which is well known by law enforcement as a call for all Pagans to join in on a fight,” the suit said.

The plaintiffs claimed that Mr. Zokaites punched Detective Lincoln at least five times in the back of the head, kicked him and struck his head on the floor. They also alleged that Mr. DeLuca tried to poke the detective’s eyes.

Video showed that an officer pinned Mr. DeLuca to the bar while Detective Lincoln struck him 19 times in the face, leading to what the Pagan said in a lawsuit (link is external) was head and face trauma and a dislocated elbow.

In his countersuit, Detective Lincoln described that encounter this way: “Due to DeLuca’s possession of a firearm, Lincoln continued to attempt to restrain DeLuca even after pepper spray had been sprayed in the vicinity of Lincoln, DeLuca, Burgunder and Honick. Once additional uniformed police officers entered the bar, Lincoln disengaged from DeLuca due to the effects of the pepper spray.”

Detective Lincoln claimed to have hurt his right hand and head and suffered bruises, headaches and eye irritation.

On the night of the fight, Kopy’s did not have security, according to the suit. And after the female patron outed the officers, the bartender on duty did not provide security or evict the Pagans, the suit said.

Mr. Farneth, the bar’s attorney, described Kopy’s as a “family-owned and -operated” business with a “stellar” record. He acknowledged that Pagans members have patronized Kopy’s, but have done so only occasionally without problems.
“During the course of the evening and before the altercation started, it was made known to the bartender that the four gentlemen seated at the end of the bar closest to the door were in fact undercover City of Pittsburgh police officers,” Mr. Farneth said. “So why would you need security? Why would you need to call police if the police were already there?”