Published by MC & Gjengkriminalitet October 04, 2019
WILDWOOD — Bikers with the annual Roar to the Shore event may have overstayed their welcome. 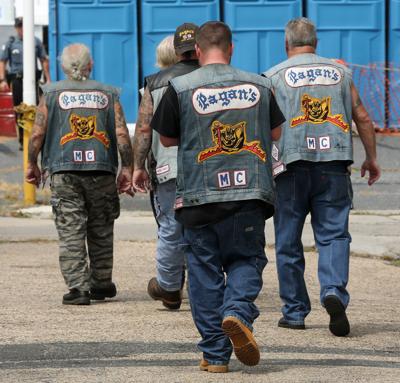 The annual Roar to the Shore brings thousands of motorcyclists to the Wildwoods this weekend. Friday Sept. 9, 2016. (Dale Gerhard/Press of City)

"It's morphed into something that it never really started as," Byron said. "It's become a heavy dose of the outlaw-type of bike guys, and it's been a little intimidating to the family-oriented biker."
Event promoter Joe Murray did not respond to multiple requests for comment.
The 23rd annual gathering took place Sept. 5 to 8, and Byron said commissioners received calls from people in the community upset with what the event has become.

The city paid about $40,000 this year for police overtime, Byron said. In a Facebook post, Wildwood police listed 26 arrests during Roar to the Shore. Multiple people were charged with possession of a weapon for an unlawful purpose and were found with handguns, knives and brass knuckles. Multiple people were charged with possession of a controlled dangerous substance and were found with hydrocodone, methamphetamine and marijuana. Other charges included driving under the influence, theft of movable property and conspiracy to commit robbery. It was unclear whether all the charges listed were filed against Roar participants.


Police said they worked with the Cape May County Prosecutor's Office and other law enforcement agencies during the event.

Even so, the event plays host to legions of biking hobbyists and nonviolent clubs who could see their annual get-together evaporate, taken over by unwelcome groups. For city businesses, the after-Labor Day event brings thousands of potential customers to the shore town when it otherwise starts to empty out.

Should the city decide the rally is not in its best interest, it can deny the permit application, Byron said. But that has no bearing on bikers choosing to congregate in town on their own.

Employees at accommodations near Rio Grande and Atlantic avenues said their guests every year have been largely peaceful.

"The gentlemen and ladies are always polite, friendly. They like staying here," said Bob Schuler, front desk manager at the StarLux Hotel. "It's definitely good for business here."
Schuler said the event is always preempted by increased police presence. The only issue it's ever caused for him is noise.
"It's loud," he said, laughing. "I'm a resident also. I live two blocks away, so for me, it's loud."

Around the corner from the StarLux, Dave Adelizzi, whose family owns the Crystal Sands Motel, said their part of the city generally doesn't see any crime or residual problems from Roar to the Shore.

Their clientele is generally regular motorcycle enthusiasts. There are fewer bars in their immediate area, and the outlaw gangs tend to stay at hotels and motels farther down Atlantic Avenue toward the middle of the city, he said.

If there's any riffraff, it tends to stay up that way. ... They get the Pagans and all the other people," Adelizzi said. "The biggest complaint here would be noise, because Rio Grande Avenue is the main drag out. Well, it's noisy. But other than that, it's positive."


Byron said the topic was introduced in a commissioners meeting soon after this year's event. He was taken aback by the suggestion that they nix Roar to the Shore entirely.
The decision would need to be made after discussions with the police, the promoter, business owners and community members, Byron said.
"Maybe there's a way that we can fix this, rather that just spontaneously and emotionally just saying, 'No, this is gonna go away,'" Byron said. "And that's my feeling. I'm not saying I'm for or against it, what I'm saying is I'm not ready to pull the trigger on it until we've looked at this inside-out."


Beyond crime, another aspect at play is the appearance of increased police presence in a town looking to attract families on vacation, Byron said.
"I don't like walking down the street and having my 12-year-old look up on a motel and see a sniper up there and trying to explain to them why the SWAT team's all over the place," he said. "That's not what Wildwood's all about, so that's not what we're trying to project."