Posted by MC & Gjengkriminalitet November 22, 2019
Christopher “Durty” Cosimano and Michael “Pumpkin” Mencher were members of the 69′ers Motorcycle Club. Prosecutors said they were responsible for the rush-hour assassination of Paul Anderson, a president in the rival Outlaws Motorcycle Club.

TAMPA — Two Tampa motorcycle gang members received sentences of life in prison Wednesday for their respective roles in the December 2017 assassination of a rival gang leader in Pasco County.
But neither of them went quietly.

In separate back-to-back hearings, Christopher “Durty” Cosimano and Michael “Pumpkin” Mencher each denied participation in the brazen, rush-hour shooting of Paul Anderson, who was president of the Cross Bayou chapter of the Outlaws Motorcycle Club.

Both men, who the government said were members of the rival 69′ers Motorcycle Club, expressed condolences to Anderson’s family, but then delivered lengthy and impassioned speeches in which they professed their innocence, accused witnesses of lying, and claimed the government made up or held back evidence that could have helped their defense.
“I’m fighting for my life here," said Mencher, “for a crime I did not commit.”
“I was there,” said Cosimano, “but I didn’t pull the trigger.”

Asked by U.S. District Judge Mary Scriven who did pull the trigger, Cosimano blamed Mencher. He gave a convoluted explanation of what happened, saying that he had only intended to fight Anderson to settle a score.

Related: Defendants blame others in trial for assassination of rival motorcycle gang leader 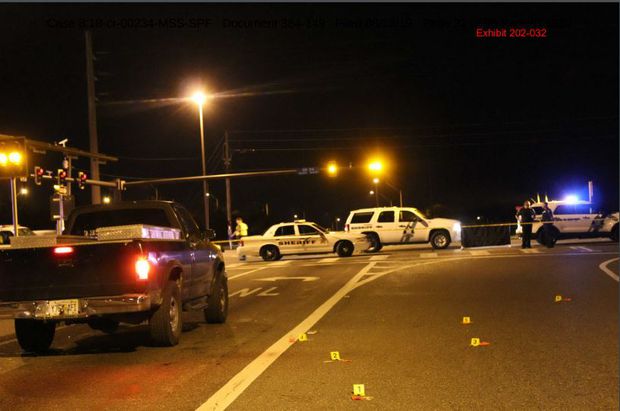 A photograph used as evidence in the federal trial of Christopher Cosimano and Michael Mencher shows the crime scene where Paul Anderson was shot at the end of an off ramp from the Suncoast Parkway at State Road 54. [U.S. District Court]

A jury found Cosimano and Mencher guilty in August on charges that included conspiracy and murder in aid of racketeering. Prosecutors told jurors that Anderson’s killing was the culmination of a months-long feud between the 69′ers and the Outlaws, which began with the severe beating of two 69′ers at a Pinellas County restaurant.

Cosimano, who the government said was the president of the “Killsborough” chapter of the 69′ers, vowed to take the lives of two Outlaws in reprisal, prosecutors said.

On the afternoon of Dec. 21, 2017, Anderson was sitting in his pickup truck at the end of the northbound off-ramp from the Suncoast Parkway at State Road 54. In the midst of rush-hour traffic, two masked men on motorcycles approached him from behind and fired repeated gunshots through the truck windows.

Court documents described a campaign of violence, which included the burning of an Outlaws clubhouse and the non-fatal shooting of James “Jimbo” Costa, who was said to be the president of the Outlaws in St. Petersburg. At trial, Cosimano was found not guilty of charges related to the Costa shooting.

But there was other evidence linking the group to Anderson’s murder. Shortly after it happened, investigators set up surveillance on a home in Riverview which served as the 69′ers clubhouse. They heard mechanical noises coming from inside and later determined that the group had modified their motorcycles to make them less identifiable. 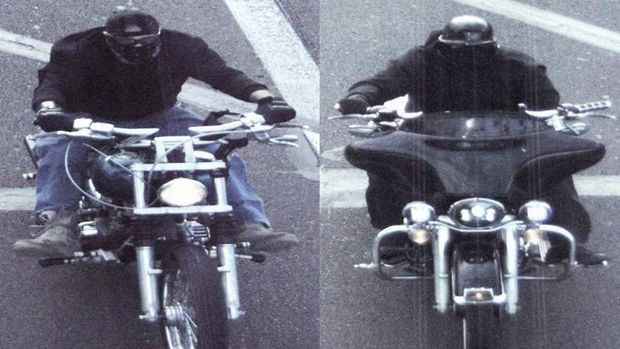 In December 2017, two masked motorcycle gang members were accused of assassinating Paul Anderson, 44, president of the Cross Bayou chapter of the Outlaws Motorcycle Club, while his pickup was stopped at a traffic light in Pasco County. [Pasco County Sheriff's Office]

The three other 69′ers who were charged in the case were Allan “Big Beefy” Guinto, Erick “Big E” Robinson, and Cody “Little Savage” Wesling. All three later signed plea agreements. Guinto and Wesling testified at the trial.

Cosimano and Mencher argued that someone else was responsible for Anderson’s murder. But the jury thought otherwise. The guilty verdict ensured both would receive lifetime prison sentences.
“I feel I am being persecuted for exercising my right to remain silent,” Mencher said in court Wednesday. He said he wanted to testify at trial, to tell the jury his side of the story, but his attorney told him it was a bad idea.
“She pretty much called me an idiot,” he said.

Cosimano gestured with tattooed arms, his voice rising at times as though he was near tears, as he struggled to explain what led to the shooting. He mentioned something about a road rage incident with Anderson. He admitted he was at the shooting scene, but said that Mencher killed Anderson. He said he wished it could have gone differently.
“There’s no excuse,” Cosimano said. “I was the one who wanted to go fight him.”

Attorneys said both men would appeal their convictions.
No one from Anderson’s family spoke at the hearing, but his mother, Maurine, sat in the courtroom gallery. She gave a series of photos of her son to Assistant U.S. Attorney Carlton Gammons. The lawyer said she wanted the judge to know her son was an Army veteran, that he was a good man, and that she loved him very much.