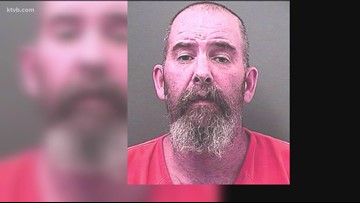 MARSING, Idaho — A member of an Owyhee County motorcycle gang is facing felony charges in connection to a bizarre attack that left a Marsing farmer dead.

But authorities say the suspect, 50-year-old Mark Warner, did not fire the shot that killed Rod St. Clair, and the reasoning behind the attack remain unclear.

According to court documents, deputies were called out to St. Clair's home on Island View Drive the evening of Nov. 15 for a report of a man beating on the doors and windows of the home.

St. Clair went outside with a gun to look for the man, but didn't find him. Instead, he told deputies when they arrived at the home, he discovered a black backpack sitting next to a tree.

Inside the bag was a cell phone charger, several sets of keys and clothing, including a green bandanna and a black T-shirt with the Vagos motorcycle gang logo on it.

St. Clair told deputies he had been in his living room when he heard two pops - sounds deputies later determined were from someone hitting and breaking the windshield and front windows of a car parked outside the house.

According to court documents, St. Clair was headed out to investigate when he heard a man calling for help. The victim then headed into his bedroom, where he could see a man standing outside with his face pressed up against the glass.

When St. Clair turned on the lights, the man took off running. The homeowner told deputies he called out "what do you want?" but only heard the man laughing in response.

Owyhee County Sheriff's Office deputies searched the area and the fields around the house, but did not find anyone. The investigators found that a lamp outside and the back bedroom window had also been broken.

St. Clair's daughter-in-law told the deputies that she also had seen the man calling out that he was hurt while standing up against the outside bedroom door.

While deputies were speaking to the victim and his family, dogs at a house to the south began to bark "in an aggressive, alerting manner" according to the probable cause affidavit.

The deputies went to check that house, but as they were searching, they heard several gunshots from St. Clair's home. Back at the victim's home, the investigators found St. Clair's lying dead on the ground, and his daughter-in-law Debra Thomson standing with a gun in her hand.

Thomson told deputies that the unknown man - identified as Warner - had charged at her and St. Clair swinging a long, shiny object. The weapon was later determined to be a flail -  a two-pound spiky metal ball on a rope.

Thomson said both she and St. Clair were armed, and that she shot at the man who was running at them, but he did not stop. Warner hit St. Clair with the flail, according to court documents, continuing to attack him as Thomson fired.

Thomson said the attacker grabbed onto St. Clair and turned him in her direction "as to use Rod as a shield from being shot." At the same time, Thomson said, she fired her gun, and believed the bullet struck St. Clair.

The man then ran away around the corner of the home, she said. St. Clair died at the scene.
Officials say St. Clair was shot in the back. A medical examiner will make the final determination of whether it was Thomson's bullet that killed him.

Deputies from Owyhee and Canyon counties were continuing the search for Warner, when they heard a noise, then heard the suspect say "I'm Mark," according to court documents. Warner was lying on his stomach in the bushes, on top of a Vagos motorcycle gang vest, and had been shot twice in the abdomen.

Both Thomson and St. Clair's wife identified Warner as the man who had attacked St. Clair. Warner told investigators that he was alone, and that he had left his car along State Highway 78 after it broke Down.

Warner was taken to a local hospital for treatment, then booked into the Owyhee County Jail Saturday.

Clad in an orange jail uniform, he spoke in a low voice during his initial appearance, telling the judge that he knew what he was being charged with, and that he would hire his own attorney. His bond was set at $1 million.

It's unclear why Warner would target St. Clair. The men did not know each other, according to the lead investigator, and do not seem to have any connection. The investigator said that the sheriff's office is still working to uncover a motive, and that more arrests could be coming in connection to the case.

Investigators described the Owyhee County chapter of the outlaw motorcycle gang Warner belongs to as small, fluctuating between five and 20 members.

Prosecutors say another man arrested in the hours after St. Clair's death is linked to the case, although he has not been charged in the killing. Joshua McDaniel, 37, faces charges of resisting and obstructing officers and possession of a handgun as a felon.
McDaniel, who investigators say knows Warner, also told authorities the car Warner had left along Highway 78 belonged to him, according to court documents.

Warner is currently facing a charge of involuntary manslaughter "due to the action of Mark putting Rod in the line of gunfire and thus killing him," according to court documents. He is also charged with aggravated battery, aggravated assault, and malicious injury to property.

He is due back in court Dec. 9 for a preliminary hearing.