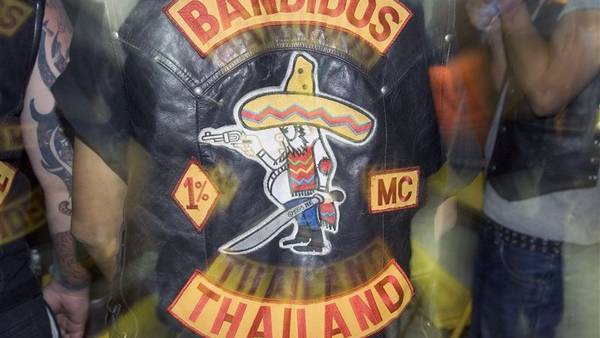 A Western Australian man, who is alleged to be a member of the Bandidos motorbike gang in Thailand, has been arrested on charges of extortion and threatening violence in Chiang Mai.

Derek Paul Gibson and a Dutch man, Adrianus van Gool, were arrested in a Chiang Mai department store car park late last week, after police were told by another Australian man they were threatening to kill his family over unpaid debt-recovery fees, the Australian broadcaster reported.

The Australian informant, known only as Sandler in local media reports, said he met the two men at a coffee shop late last year.

During the meeting he complained his business partner had defrauded him out of a substantial amount of money invested in a failed restaurant. Mr Sandler told police he didn‘t order Gibson or van Gool to recover the debt but rather to warn the former business partner to repay the outstanding funds.

A month later, the two men allegedly called on Mr Sandler to pay 1.7 million baht for attempting to recover the lost funds. It is alleged that they threatened to kill Mr Sandler and his family if he didn‘t pay.

Mr Sandler promised the pair an initial payment of 300,000 baht before reporting the men to local police.

Pol Lt Pornsap Praserdsak, a local police commander, said that following a series of other complaints, an investigation into extortion and threats against foreign tourists in northern Thailand was under way.

Both Gibson and van Gool deny the charges and links to local gangs, saying their main interest is their bikes.
Police sources link the men to the Bandidos motorbike gang as well as the German outlaw motorcycle club, Gremium, which is reported to have a chapter in Pattaya.

Police say there are several Australian-based motorbike gangs in Thailand, with links to drug trafficking and other criminal operations.