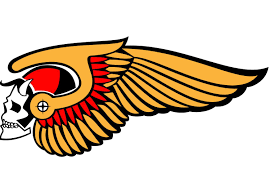 Hundreds of mourners gathered to farewell a Hells Angel bikie associate known as ‘Blackie’ who was shot dead as he slept.

Kemel Barakat, 29, was found dead after being hit with more than a dozen bullets in his stomach and chest while he was asleep in his home in Mortlake in in the early hours of Friday.

On Thursday, mourners arrived at the Alawi Youth Movement Centre in Marrickville for Mr Barakat’s funeral.

There was a heavy police presence at the service with several marked and unmarked vehicle doing laps of the industrial area as it was held, according to the Police.

The service was also well attended by undercover police officers and reporters ‘acting casual‘ in their cars.

During the memorial service, a washed Mr Barakat was wrapped up in a white cloth with his face exposed.

Relatives, including his wife Amanda, spoke to him and said heartfelt final farewells, some touching his neck.

He was carried in his casket to Rookwood Cemetery where he was buried. Among those paying their respects was Ahmad ‘Rock’ Ahmad, a close friend of Mr Barakat and the brother of murdered crime figure Wally Ahmad.

Mr Barakat was aware that he was being targeted as just weeks before his death, he avoided being shot in Sydney’s western suburbs.

He had only been living in the Mortlake apartment for a month or so when he was killed. The address was only supposed to be known to his close friends, family and the police. His unit was secure – but according to the Herald, there was no sign of forced entry inside.

A woman was in bed with Mr Barakat at the time of his death, but she was not injured. His wife was on holiday in Thailand.

Police are investigating whether Mr Barakat was killed for his alleged role in the brazen public shooting of hitman Hamad Assaad.

Mr Barakat, who was a senior member in the Comancheros before switching allegiances, is one of numerous suspects in the murder of 29-year-old Mr Assaad, who was killed outside his home in Georges Hall in October last year.
Mr Assaad is reportedly the prime suspect in the public shooting of convicted killer Walid ‘Wally’ Ahmed a few months earlier.

He was killed after being shot on the rooftop car park of the Bankstown Central shopping centre in April.

One theory proposes that Mr Assaad was killed as revenge for his suspected role in Mr Ahmad’s death.

Ten underworld figures have been killed in Sydney since 2015.
The spate of bloody murders prompted NSW Police to launch Strike Force Osprey in November to oversee the investigations into each of the incidents.