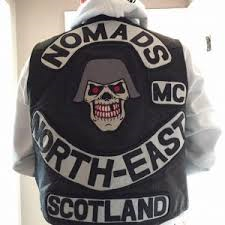 Colin Sutherland told a jury he lost consciousness after coming off his bike but remembers hearing the sound of his waistcoat being removed.

A motorcyclist has told an attempted murder trial how he has a “vague memory” of hearing his “club” waistcoat being “cut off” his body moments after being struck by a car.

Colin Sutherland, 25, told a jury that he lost consciousness moments after the collision on the A98 Fochabers to Banff road at Cullen, Moray, on September 8 2018. The High Court in Edinburgh heard how Mr Sutherland remembers the sight of police officers and ambulance crews helping him following the incident.

And he also told prosecution lawyer Andrew Bowen QC that he recollects hearing the sound of his waistcoat being removed from his body.

He said: “When I came too my waistcoat was off me so I assume it was taken off me.
“I have a vague memory of hearing it being cut.”

Mr Bowen then asked him what was written on the waistcoat. Mr Sutherland replied: “Nomads. North East Scotland.”

Mr Sutherland was giving evidence on the first day of proceedings against four men who are accused of attempting to murder him.

The four accused are also standing trial on further charges of attempted murder, assault to the endangering of lives, breach of the peace and possessing knives without “reasonable excuse or lawful authority”.

The men deny all charges.
On Thursday, Mr Sutherland said that he and a group of fellow motorcyclists had spent September 8, 2018, riding across the North East of Scotland.

They had stopped in Elgin for a break at 4pm and then decided to ride on. He said that as they approached Cullen, he was “impacted” by a car and that he “came off”.

Mr Sutherland, whose address was given in court as being care of the Police, said he couldn’t remember very much about the incident as he had lost consciousness.

The four men are standing trial on a total of seven charges. Prosecutors claim that on September 8, 2018, at the A98 Fochabers to Banff Road at Cullen, the four men did, while acting with others, assault a man called Alistair Thompson.

It’s claimed that Mr Thompson was riding a motorcycle and that they drove a car at him before attempting to knock him off his bike. Prosecutors also claim that by doing this alleged action, they attempted to murder Mr Thompson.

Prosecutors also claim that on the same date and at the same location, they wore masks over their faces and assaulted Colin Sutherland.

It’s claimed that they drove a car at Mr Sutherland, collided with him “at speed” and this caused him to fall from his bike and lose consciousness.

Prosecutors say they then repeatedly struck Mr Sutherland on the head and body with a claw hammer, a tyre iron and a baseball bat before repeatedly kicking him on the body.

It’s claimed they then cut Mr Sutherland’s clothing with a knife and that they attempted to murder him.

The third charge states they also attempted to murder another man called John Sutherland at the same location and on the same date.

The Crown also claim that on the same date at the same location, they assaulted a man called Edward Forrest by repeatedly striking him on the head and body with a claw hammer which rendered him unconscious.

Prosecutors say that these alleged actions were to Mr Forrest’s “severe injury, permanent disfigurement and to the danger” of his life.

They are also alleged to have assaulted another man called Nicky Syratt to “his injury and danger of his life” on the same date and same location.

Prosecutors also say the four men committed a breach of the peace on the same date and at the same location by having their “faces masked” and by brandishing weapons and by behaving aggressively.

Prosecutors also claim that on September 8. 2018, at the A96, near to Inveramsay Bridge near Inverurie, Aberdeenshire, Mr Yeomans had “without reasonable excuse or lawful authority” two lock knives in his possessions.

The four men have pleaded not guilty to all charges.

The trial, before judge Lady Scott, continues on Friday.