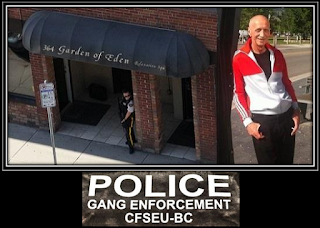 Dale Habib is in the news. Kelowna Cap News is reporting that "A former associate of a disbanded Kelowna Hells Angels chapter is back in court on six firearms charges and one drug charge. Dale Habib, who was previously linked to the Kingpin Crew, appeared in-person in Kelowna court on Monday. His lawyer, Kim Ross, appeared by telephone from Alberta."

The key words here are former associate of a disbanded Kelowna Hells Angels chapter. The Kingpin Crew is disbanded not the Kelowna Hells Angels and yes, Dale was president of the Kingpin Crew. He left that life and is no longer involved. The gun charges and the drug charges are bogus. A few long guns in a closet. Big deal. Long guns don't need to be stored in a gun safe with trigger locks. They just need to be in a locked closet. This closet didn't have a lock on it. Who cares? He had one handgun in his drawer that wasn't in the safe. It really isn't a big deal.

As for the drug charges, he seized a tiny bag of drugs from a patron at the club he was working the door at that night and forgot to turn it into the desk. He is not involved with drug trafficking. The compromised gang task force keeps going after former associates to pretend they are doing their job when we all know they aren't. It's just like how they kept hounding Shrader after he got a real job and left the life. They kept harassing him because they wanted him to rat out former associates like Blaze has, and he refused. The same thing with Dale.

Blaze and the BC GTF even lied and tried to blame Shrader for Larry Amero and James Riach getting shot in Kelowna. That was a bold faced lie. The crowns witness was the one that set them up not Schrader. Blaze is a compulsive liar and keeps turning in former associates so he can stay out of prison on the PoPo's payroll. Blaze outed himself when he claimed Shrader was footing the bill for my website which he isn't. AV would not have done that. So Blaze isn't in prison.

The Garden of Eden wasn't shut down by the GTF. It was shut down because the club is under new management and they cut Arnie loose. The GTF did Sweet F*ck All about it. Just sayin.