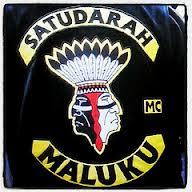 The president of a Canberra bikie gang has been arrested on weapons charges following an incident at a Belconnen home over the weekend, police say.


ACT police allege a man tried to break in to a home in Belconnen about 5.40pm Saturday. Officers were called but the man had already left.

A 40-year-old man from Nicholls, who police say is the president of the ACT chapter of the Satudarah Outlaw Motorcycle Gang, was found a short time later driving a maroon Mitsubishi Outlander.

Following a search of the car, officers said they found a 38 centimetre extendable baton and a pair of knuckle dusters.

The man was arrested and charged with two counts of possessing a prohibited weapon. He is expected to face the ACT Magistrates Court on Monday morning.