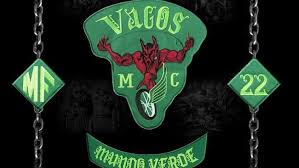 Closing arguments were suspended for scheduling reasons in the federal racketeering conspiracy trial of eight accused Vagos biker club members in a case stemming from a deadly 2011 casino gunfight with rival Hells Angels in northern Nevada.

The jury in Las Vegas then will begin deliberating about the more than five months of testimony.
Prosecutors and defense lawyers have offered starkly different interpretations of evidence the government says shows Vagos are a criminal enterprise that relies on threats and violence to battle with Hells Angels and others in California, Arizona, Hawaii, Oregon, Utah and Nevada.

Attorneys for the defendants say the case was built on accounts by discredited key witnesses who admitted lying during their testimony. They say prosecutors have not proved guilt beyond reasonable doubt.

No Vagos co-defendants testified. Each faces the possibility of life in prison if he’s convicted.
The then-president of the Hells Angels chapter in San Jose, California, was killed in the shootout that sent casino patrons diving for cover at the Nugget casino in Sparks. Two Vagos members were wounded.