Published by MC & Gjengkriminalitet February 05, 2020
Four West Australian bikies have been arrested in a “national day of action” targeting members of the Mongols Outlaw Motorcycle Gang.

WA Police executed seven search warrants across Perth on Wednesday, uncovering drugs, cash and weapons including an electronic stun device and military bayonet. Four senior Mongols members were arrested as a result of the raids. 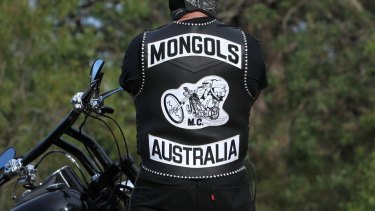 The arrests were the result of a "national day of action" targeting the Mongols.Credit:File/Simon Alekna

The search warrants carried out in Landsdale, Thornlie, Darch, Girrawheen, Nollamara, Butler and Ellenbrook were part of a national police push targeting the gang.

“If left unchecked, outlaw motorcycle gangs would pose a greater threat to the community – they would expand their criminal networks and expand their criminal activity,” he said.
“You only have to look at the history of the Mongols Outlaw Motorcycle Gang, both here and overseas, to learn their history of violence and links to established criminal networks.”

And Senior Sergeant Mottolini said bikie gangs could expect law enforcement and intelligence agencies to maintain a “significant focus” on them.
“No one in the community believes their claims to simply being a bunch of blokes riding motorcycles – that cover story hasn’t worked for many years now,” he said.
“The safety of our community is paramount, and we will continue to disrupt the criminal activity being conducted by outlaw motorcycle gangs in Western Australia.”