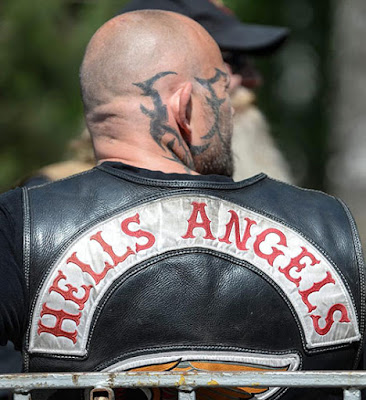 Joshua O’Bryan regained consciousness on July 12 inside the Kool Kats Tattoo Parlor in Englewood after being choked and beaten. His wrists and ankles were hogtied, and he was bleeding.

With members of Denver’s Hells Angels Motorcycle Club all around him, shop owner Dusty Ullrich started blacking out O’Bryan’s “Death Head” tattoo, the emblem signifying membership in the notorious biker group. In its place, Ullrich scrawled the word “Bad” into O’Bryan’s skin as other Hells Angels photographed the ritual on their phones.
“If you ever tell anyone about this,” Ullrich said, “I will (expletive) kill you and slit your throat.”

But O’Bryan told police about what happened, launching a five-month investigation into the notorious bikers that came to a head in November when authorities raided the Hells Angels’ clubhouse in Denver’s Highland neighborhood.

During the early morning raid there and at other locations, officials seized methamphetamine, cocaine, cash and dozens of firearms. Thirteen Hells Angels members, ranging from 30 to 81 years old, were charged with violating Colorado’s organized crime act, along with a litany of assault, burglary and kidnapping charges. A 14th person affiliated with the Destroyer motorcycle gang also was indicted.

For months, the accusations against the 14 men were secret because their arrest affidavits were suppressed. But earlier this month prosecutors outlined their case against the Hells Angels in Denver County Court during preliminary hearings for three defendants, and their arrest affidavits were released after a Denver Post reporter appealed to the courts to unseal the documents.

The entire case hinges on O’Bryan, the former member who said he was beaten by men he once called his brothers after they suspected he was talking to law enforcement following an earlier raid on his Lakewood motorcycle shop, according to an arrest affidavit.

O’Bryan told investigators he could provide intricate details on the Hells Angels Denver chapter’s involvement with stash houses of meth, prostitutes, arms deals and money laundering across the country.
“If you want ‘loves and hugs’ you go to the … Rocky Mountain chapter,” O’Bryan told investigators, according to an arrest affidavit. “If you want guns and drugs, you go to the … Denver Charter.”
Defense attorneys for the Hells Angels said in court that the prosecution is basing its entire case on the word of a man who had warrants out for his arrest in multiple counties, including drug possession, car theft and failing to appear in court. When police originally contacted O’Bryan in July, he gave them false identification.
“It doesn’t take a huge leap to understand he had motive to fabricate,” Brian Russo, the lawyer for Hells Angels president Jason Sellers, said during the hearing. “He was in serious trouble with the law, serious trouble with people he asked for help. He became overwhelmed and availed himself of the first opportunity, creating this fiction.”

O’Bryan told investigators that before things went haywire, he had devoted his life to the Hells Angels, giving up his marriage and a job where he earned $85,000 annually.

Everything changed after Lakewood police raided his motorcycle shop last year and arrested O’Bryan on firearms charges. One of the tenets of being in the Hells Angels is members don’t talk to law enforcement. And O’Bryan believed the others were nervous that he had, the arrest affidavit said.

On June 28, O’Bryan told authorities he was ambushed by a group of Hells Angels at a stash house in Erie, where he was punched, shot at and stabbed before escaping. Then in July, O’Bryan said, he was beaten in a garage, taken to the Englewood tattoo parlor where his tattoos were inked over — a tactic used when the Hells Angels want someone out. O’Bryan said he was left bleeding in a Denver alley while the Hells Angels stole thousands of dollars worth of tools, motorcycles and cash from him, according to the arrest affidavit.

A week after the July assault, O’Bryan contacted authorities from the Jefferson County jail.
During a series of interviews, O’Bryan told investigators about the make-up of the organization and the extent of their illicit activity, according to the arrest affidavit. He said he had four pounds of meth from the cartel in his Lakewood shop before it got raided, bound for Hells Angels chapters in other states. O’Bryan claimed he knew the locations of stash houses in Minnesota and Arizona and said the club has informants in law enforcement around the Denver metro area, who give them a heads up on investigations and raids.

The organization also steals motorcycles for parts and engages in a “high number of arms deals,” O’Bryan’s testimony in the arrest affidavit states.

It is unclear whether law enforcement is taking action on stash houses or chapters in other states. The charges against the Denver chapter’s members relate to the two assaults in June and July against O’Bryan, in addition to the overarching organized crime counts.

Defense attorneys have shown they will attack O’Bryan’s credibility. He omitted key pieces of his story when speaking with investigators, such as not telling authorities he stole a truck in Erie the night he was assaulted.
“The government is aware their evidence they rely on is from someone who has a distant relation with the truth,” Russo told the judge. “They know they have problems with this witness. This looks very sexy for them, but the takeaway is they’re relying on a prevaricator. They don’t have anything else.”

Time will tell whether their tactic will work. But Denver’s Hells Angels have a history of avoiding legal trouble when targeted by law enforcement.

In 2003, the city paid $50,000 to settle a lawsuit after 18 members were thrown to the ground outside their headquarters and held for hours, with police finding no illicit activity. The city issued a formal apology.

Five years later, Denver and Mountain View police were forced to apologize — and pay money again — after they held eight bikers at automatic rifle-point for more than hour without probable cause during a traffic stop. The cities paid $14,000 as part of the settlement.