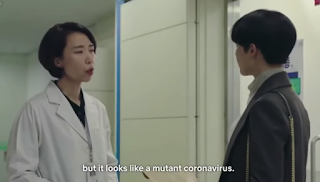 The Sun in England is reporting that "Netflix drama My Secret Terrius is causing a stir as shocked fans claim it predicted the coronavirus pandemic two years ago. Here's everything you need to know about the drama and its eerie episode 10. My Secret Terrius is a 2018 South Korean television series. It aired from September to November 2018 on channel MBC and can now be viewed on Netflix. It follows the story of a woman named Go Ae-rin who loses her husband and then discovers he was part of a huge conspiracy."

In episode 10 the doctor says it was the corona virus which is similar to Mers.

Another Corona virus prediction like the one in the 1981 book The Eyes of Darkness. It's time to face the fraud and storm the beach to save our democratic system from financial collapse.

Pretty Maids - Mother of All Lies: "State of the nation discipline You keep the crisis bad at bay We'll bring you growth and prosperity Restore financial stability And then they'll tax you to your knees Can't you see, they are twisting our reality Never practice what they preach I'm tellin' you, we're witnessing the mother of all lies Powerwhores and presidents Breaking down our confidence Fooled again, we're witnessing the mother of all lies."