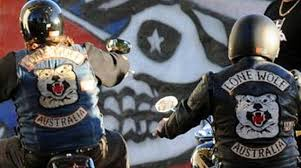 An outlaw bikie gang linked to a double murder, kidnapping and torture has been targeted by police raids in Queensland and New South Wales.

More than 200 officers conducted raids across both states on members and associates of the Lone Wolf Outlaw Motorcycle Gang.

Police say the gang is linked to a double murder on the Gold Coast last October as well as the kidnapping of a man and woman less than a week later at Ipswich, west of Brisbane.

Shane Ross and Cameron Martin were both killed after being shot at Tallebudgera.

A week later, on October 25, five heavily disguised people stormed a business premises in Raceview and kidnapped a 55-year-old man and 40-year-old woman.

They viciously assaulted the man before dumping the two victims in bushland at Ripley, east of Ipswich.

Detective Superintendent Brendan Smith said the two crimes are not directly connected.
"We have a number of persons of interest now for that murder and they are members of that gang," he said.
"These gangs are notorious in their behaviour ... they are not motorcyclist enthusiasts.
"This was a targeted murder with no risk to the general public on the Gold Coast.
"This is a vicious crime. It's clearly an orchestrated murder."

He said they were keen to locate a white BMW X5 bearing cloned plates 498YRF in relation to the double murder.

The raids were carried out across Sydney, northern NSW and the Gold Coast.
Drugs, firearms and electronic devices were retrieved, Superintendent Smith said.
"We have made significant inroads and we are very close to solving this matter."