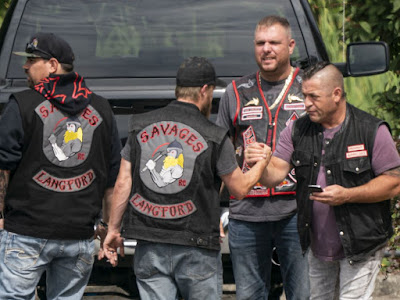 A founding member of the motorcycle club the Savages, an associate of the Hell’s Angels which is run out of Langford, has been sentenced to almost three years in jail after pleading guilty to having a firearm for protection after trying to disassociate with the club.

Lyle Scott Briscoe, 32, pleaded guilty to a single count of possession of a loaded prohibited firearm which was found during a roadblock checking for impaired drivers in October 2018, according to a judgment posted on March 31. Briscoe told police his vehicle’s registration and insurance were in the back, and voluntarily got out to get the documents.

One of the officers saw a bulge near Briscoe’s waist and asked what it was, to which he replied “a firearm.” Police found a .25 caliber semi-automatic pistol, with seven rounds in the magazine and no round in the chamber. It was later determined the gun had been stolen in 2010.

Cheyne Hodson, defence lawyer for Briscoe, told the courts he had been a founding member of the motorcycle club, the Savages, which had started out as a social and recreational club but began to engage in organized criminal activity, along with becoming associated with the Hell’s Angels.

Briscoe didn’t want to be involved and tried to disassociate himself from the Savages.
“The Savages did not accede to his withdrawal and launched a number of violent assaults against Mr. Briscoe and his parents,” reads the judgment, adding that they shot at Briscoe on three separate occasions.

During one of these occasions, Briscoe was struck with a bullet. According to the judgment, Briscoe’s mother was also shot at and his father was the victim of an armed home invasion.
“Mr. Briscoe was carrying the firearm in question for the purpose of defending himself against future attacks.”

Judge Ted Gouge called Briscoe an “articulate, intelligent man with a mature understanding of the situation.” Briscoe has no criminal record and while he was in custody waiting to be sentenced he participated in Alcoholics and Narcotics Anonymous meetings, in addition to working towards completing Grade 12.

Defence asked for 30 months in jail while Crown sought a sentence of 36 months in jail.
“He had been thrice shot at by them in the recent past, and intended to respond in kind on the next occasion. That was likely to be in a public place. The risk to the safety of innocent members of the public is manifest,” stated Gouge.

Gouge sentenced Briscoe to jail with credit for 62 days in custody, leaving the remaining 1,018 days to be served.