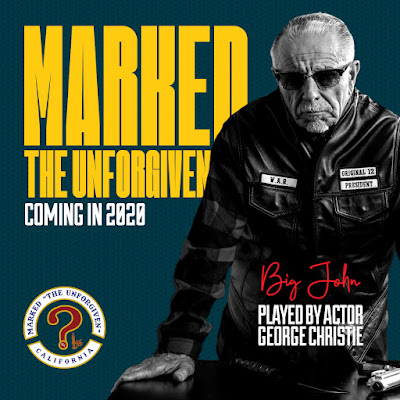 We caught up with George Christie via video chat as he sits in his apartment in Malaga, Spain. He is currently filming “Marked-The Unforgiven” in Europe but the production is on “hiatus” due to the Covid 19 quarantine.“Marked-The Unforgiven” is the story of a former Marine recon sniper, Jack Crest, who returns home to Ventura, California, from Afghanistan and becomes the protégé of the character, Big John, played by Christie. The Crest character links up with Big John who is a Vietnam era sniper and the two form a motorcycle club (MC) made up of only veterans which is a unique twist. The original 12 members of the club are made up of Marine Recon, Green Berets, Navy Seals and a Coast Guard captain. Their backgrounds provide a rich vein from which to mine story arcs.

One of the more intriguing story arcs is the long and mysterious connection that Big John has to the Chicago Syndicate (traditional organized crime) and that “Marked-The Unforgiven” MC is representing and operating their gambling and loan sharking for all of Ventura county which provides a never before seen insiders view into how these illegal activities are part of every day life in California.  As the character, Big John, tells his crew “there are no victims in gambling, only volunteers, they come to us to place bets and we take them. Things only get complicated when they can’t pay”.

Pat Andrew, executive producer of Wanda-Halcyon television, explains that “Marked-The Unforgiven” is effectively a soap opera about the life of a unique motorcyle club and the dichotomies between the members of the club and the people they deal with. Flashbacks on all the characters in Season 1 reveal that some come from typical families, some from broken homes and a lot of their personalities are shaped by their combat experience in Afghanistan and Iraq. The George Christie character, Big John, is not only dealing with a group of trained killers but also with a group that has issues with opiate dependency, post traumatic stress syndrome etc. but there is also another side to this group- they believe in brotherhood and love of their country. There is a rebel spirit that runs through the club and the character, Big John, is not only the MC President but also assumes the role of father, psychiatrist, drug rehab counsellor and “hammer” to keep his own guys in line while also dealing with other facets that flesh out the story arc; their trigger-happy partners – the Chicago syndicate and their lethal leader, their nemesis- the Mexican Cartel and the “slice of Americana” characters who make up the core of the gambling and loansharking clients of the club.In our catch up with George Christie, we thought we would ask him some introspective questions via video link from his apartment in Malaga:1. So you achieve a rare thing…you publish a book based on your life experiences that was received well.  How did you turn that amazing feat into a television deal? I was told by several people in the entertainment business my expectations were too high, but I kept following my vision to tell my story. In my travels I met studio executive Pat Andrew, who is really just an artist stuck in a suit..he completely got it. It sounds like a overused cliche, but the rest is history…we’ve become good friends.

There’s a lot of positive buzz about the future television show on social media etc…Who would you like to be cast as a young you if you could choose any actor in the world? I like the intensity of Oscar Isaac. 3. As someone who has read your fantastic book,  there are some interesting female characters that I understand will be adapted for the television show. In that vein, what kind of woman is a man like you attracted to? I like strong women who will take a dare.

Tell us something really interesting about yourself that no one knows and that your fans would love to hear about?  Eg,. I interviewed the enigmatic author of Catcher in the Rye, Mr JD Salinger and asked him this very question….he told me that he was in the Battle of Normandy as an Intelligence officer with the top secret OSS. So, give us something good! In the late seventies I worked as a communication trouble shooter for the Department Of Defense, with a top secret security clearance.

Now, keep in mind this is in the height of the cold war with Russia. Just off the Southern Californian coast are the Channel Islands. On one of the islands was a submarine surveillance system that ressembled something out of a James Bond movie. It had a direct line to Washington and more than once I had direct conversations with high ranking military “brass”. Now what makes this story unique is, at the same time, I was President of the Los Angeles Hells Angels.

For fans who want to get a book or manuscript optioned and made into a television show, what advice would you offer them? That you go into any pitch or creative meeting with a open mind, take suggestions and criticism, if its reasonable, and don’t let your ego get in the way.

To honor our mutual friend, James Lipton of the Actors Studio, please answer the following questions from one word to one sentence:- What turns you on creatively, spiritually or emotionally?Memories, good and bad. – What turns you off?Closed minds. – What is your favorite curse word?

What sound or noise do you love? Straight pipes on a motorcycle – What sound or noise do you hate?The sound of metal on metal when a cell door shuts. – What profession other than your own would you like to attempt? Criminal attorney – What profession would you not like to attempt? Prison Guard – What is your least favorite word?Investigation – If Heaven exists, what would you like to hear God say when you arrive at the Pearly Gates? - I once had a Federal Judge tell me in open court- “only God knows what you got away with the last forty years”  I want God to say, we are going to let you in anyways…a man has always got to be an optimist!