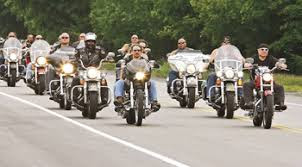 
More than 150 bikies ignored coronavirus restrictions to farewell a fallen member at a funeral despite the presence of police.

The Filthy Few motorcycle club had a huge turnout for a funeral service of one of their members at Matamata Cemetery, on New Zealand's North Island, on Tuesday.

There were reportedly up to seven police vehicles stationed outside the funeral at all times, but officers stayed their distance and allowed the funeral to take place.

The country has since loosened its lockdown laws to allow up to 50 people to attend approved funerals, but at the time the limit was just 10 people.

Lawrence Lynch, who was at the cemetery laying flowers for his sister-in-law buried the day before, said he was 'brassed-off' at the large send-off.

He told Stuff he confronted police because he was annoyed only seven people were allowed to attend his sister-in-law's service the day before.
'They said "we can't do nothing about it". To be quite honest, I don't think the cops could do anything about it, because there were too many of the gang members,' Mr Lynch said.
'It was not very nice, I thought, but if that's the ruling, that's the ruling. That's what I'm brassed off about.
'If we have to sacrifice that, how come that they were allowed that yesterday? It's quite sad when you lose a family member.'

Witnesses initially thoughts it was a checkpoint while another slammed the gathering as 'ridiculous'.
NZ Police's Inspector Andrew Mortimore, the Acting District Commander Waikato, told Daily Mail Australia he understands that COVID-19 restrictions add difficulty when you have lost a loved one.
'Prior to this funeral service, staff spoke with those involved to remind them of the Alert Level 3 restrictions and encouraged them to work with the funeral director to ensure appropriate distancing, and controls on numbers,' Inspector Mortimore said.
'Police staff will be following up with those at the service who may have breached the restrictions and enforcement action in the form of warnings or prosecutions is being considered.'

A spokeswoman from the Matamata-Piako District Council said an application for a funeral was received and they provided instructions that ten people would be allowed and their names must be provided in advanced.
'We later heard rumours in the community that large numbers were planning to attend the burial, so we arranged for security guards to be present at the cemetery and notified the police. Police were present at the funeral from the outset,' she said.
'The Security Guards attempted to record the details of those who attended for contract tracing, however, we don’t have exact figures of how many attended. We believe this was closer to 120-150, not 300 as some media outlets have reported.
'We know members of multiple gangs attended, however, do not know which gang the deceased was affiliated with.'