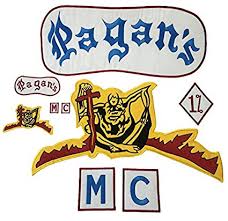 For a few hours Monday, two members of the Pagans motorcycle club had identical sentences of 20 to 40 years in prison Monday for their convictions on charges of aggravated assault and conspiracy.


But when Matthew James Vasquez left the Washington County courthouse, he had an additional 1½ to 3 years incarceration tacked onto his original penalty for violating Judge John DiSalle’s order that he have no contact with anyone who testified at his trial and that of a co-defendant in February.

Vasquez, 31, of Monessen, was in touch with a cousin when trying to make phone calls, send social media messages and get a love letter to his ex-fiancee, Jamie Granato, who had testified against him.

Granato, under oath again in the same courtroom, told about the violations of the no-contact order, corroborated by recorded phone calls Vazquez made from the county jail.

While the two were in court Monday, Vasquez often fixed his eyes on her, but she appeared to ignore his gaze.

Vasquez and Joseph Olinsky III, 46, of McKeesport, were convicted of aggravated assault, conspiracy and simple assault. A jury acquitted them of attempted homicide charges. 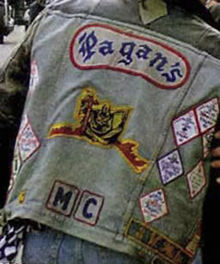 The victim, Troy Harris, 54, was an ex-president of the Fayette City chapter of the Pagans. He then joined a rival group of motorcyclists, the Sutars Soldiers. He was brutally beaten at the Slovak Club, 700 McKean Ave., April 18, 2019.

Olinsky’s attorney, Renee Colbert, was unsuccessful in asking DiSalle to hear testimony on post-traumatic stress disorder from a mental health expert before the sentence was imposed.

Olinsky’s wife, Allison, also asked for leniency.
Deputy District Attorney Jason Walsh cited Olinsky’s prior record and a federal sentence of more than a decade in seeking a harsh sentence for the defendant and labeling him “a career criminal.”
“I don’t think the Commonwealth is painting a clear picture,” Colbert said.

Speaking directly to Olinsky, the judge said, “At the early proceedings, you said you weren’t there. When a witness placed you there, you said you were there but you never did anything. Now you say it was PTSD. Your mental health record I’ve considered, but I don’t find it persuasive.”

Olinsky, who appeared via video from the county jail, apologized for the crime.
For Vasquez’s sentencing, the prosecution played expletive-filled audio and video recordings of the defendant. One video showed a smiling Vasquez contacting Pagans members at a Mon Valley bar.

Walsh characterized the exchanges as showing Vasquez lacking remorse and taking no responsibility for what happened at the Slovak Club in April of last year. “In fact, he blames everybody else,” Walsh said.
“He doesn’t respect the court, he doesn’t have any respect for anybody, although a jury convicted him.”

Out of concern for public safety, prosecutors sealed court documents until defendants were in custody last summer. Several others pleaded guilty to aggravated assault in the attack on Harris. 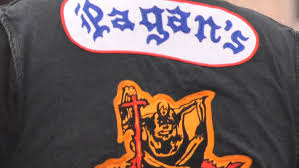 The judge said he saw no potential for Vasquez’s rehabilitation.

Once the sentencing concluded, a second hearing for Vasquez immediately began on contempt of a court order that he refrain from contact with witnesses and others involved in the case.

After the jury convicted him and Olinsky, Vasquez was heard in a taped conversation from the jail dictating word-for-word a Facebook post in which he disputed the testimony of Jamie Granato that Vasquez had abused her physically, emotionally and mentally during much of their years-long relationship.

Granato also said during the trial she did not report the incidents to law enforcement.
She did, however, discuss Vasquez’s social media statement and his requests to contact her either by phone or mail with Washington County Detective Kiprian Yarosh, who testified about the recordings to corroborate Granato’s testimony at Monday’s hearing.
“I’ll be out of jail in two years on appeal, trust me,” Vasquez communicated. Through the conduit of a relative, he sought Granato’s phone number and address, but she rebuffed the requests.

The final recording the prosecution played was a conversation in which the mother of the defendant told him, “I’m so disappointed in you. I can’t believe you would be so stupid. All you did was cause more trouble for yourself.”

Colafella asked no questions of Yarosh, and said he had no evidence to present. DiSalle gave Vasquez an opportunity to respond to the allegations.

The defendant stood and said, “May I speak and say something on the record? I have never received anything that says ‘no contact.’”
“Lack of notice can certainly be a defense,” the judge replied.
“I assumed since the trial was over and (Granato) was back on Facebook, I could reach out to her. I had no wrongful intent,” Vasquez testified from the counsel table.

He also said he did not hear the judge issue the no-contact order from the bench, noting he also failed to catch the drift of the judge’s decision when he was denied bail earlier in the case.

The judge asked Vasquez about the demeanor of his mother.
“She was upset about many things,” he replied.

While Colafella said he was not disputing the recordings, he asked for lesser penalty than Walsh was seeking.

DiSalle found Vasquez guilty of indirect contempt of a court order and sentenced him to three to six months on each of six Counts.

Noting the recordings played Monday in court did not contain threats, “We didn’t charge it that way,” Walsh said. “What his intent is, I have no idea. He absolutely wants to know where she’s at, what she’s doing.”

Both defendants were also ordered to pay restitution to the victim. Colafella declined comment as he exited the courthouse.