One house destroyed in Hamilton fire was Iron Horsemen clubhouse 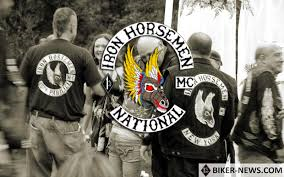 (video and photos) --- HAMILTON, Ohio (WKRC) - A fire early Wednesday morning in Hamilton destroyed three homes -- one of which belongs to the Iron Horsemen motorcycle club. The incident uncovers some wounds from gang rivalries over the years.

Firefighters arrived on scene shortly after neighbors detected the fire, at about 2 a.m. But, by the time firefighters were able to knock down the flames, the damage had been done. Five homes on Ludlow Street had been damaged -- three of them total losses.
“Usually we’re still able to look at the structure and see kind of where it started,” said Chief Mark Mercer with the Hamilton Fire Department. “This one has totally burned to the ground, and there’s just nothing left of it.”

The chief can say the fire started in the one-story home in the middle. We learned the home to the left was the clubhouse of the Iron Horseman motorcycle club. While they declined to speak with us, the fact that their clubhouse burned sent us back to our video files when a feud between the Iron Horsemen and their rivals, The Highwaymen, led to a string of violence.

September 2010: Two Horsemen in Highwaymen turf in Camp Washington ended up in a shootout with police. Four people were shot, one died. Later that year, nine Highwaymen were arrested for attacking Iron Horsemen at Frankie and Jaimie's Bar in Union Township.

In 2014, shots were fired and a Molotov cocktail thrown at the Iron Horsemen clubhouse in Covington. A Highwayman would later be arrested for attempted arson.

In 2016, an attack at Jethro's Tiki Club in Aberdeen was caught on surveillance cameras. Five Iron Horsemen were indicted.

We checked in with the Hamilton Police Department. They say they’ve had no problems with anyone at that address -- certainly not in recent history. Just a few car stops out front.
“No indication that this was foul play in any way?” we asked Mercer.
“Not at all,” he answered. “We don’t have any witnesses who say anyone was leaving. We don’t have any of that. So, at this point, we can’t say where it started.”

The only camera known to have captured anything began shooting after the fire started -- after it was too late. While they aren't hopeful much evidence will be found, the Hamilton Fire Department says it will continue investigating.