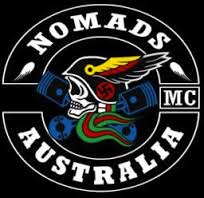 From today, the Nomads outlaw motorcycle gang is identified as a prescribed organisation under legislation – joining the Bandidos, Outlaws, Devils Henchman, Black Uhlans and Rebels outlaw motorcycle gangs in being banned from wearing their colours in public.
“These are criminal gangs and their colours are designed to show affiliation with this criminality and intimidate others. The laws don’t affect any other motorcycle clubs,” said Acting Assistant Commissioner Jo Stolp.
“The Nomads have recently sought to establish a presence in Tasmania, and through our work as part of the National Anti Gang Squad we know they have national links to serious and organised crime. This step will disrupt their moves to establish in our state.
“The banning of colours is one of a number of tools that we have available to tackle criminal groups including outlaw motorcycle gangs.
“Since the legislation was introduced there has been no national runs by any outlaw motorcycle gangs in Tasmania.”

Acting Assistant Commissioner Stolp said that intelligence held by Tasmania Police links Tasmanian outlaw motorcycle gangs to the manufacture and distribution of illicit drugs, firearms offences and the use and threats of violence to protect their way of life.
“Just earlier this month, two members of the Outlaws OMCG were charged with firearms and drug trafficking offences,” she said.
“We continue to target outlaw motorcycle gang members in terms of criminal activity, anti-social or intimidating behaviour or breaches of our laws.”

Law enforcement and Commonwealth agencies continue to work together to detect, deter and disrupt the criminal activities of all Australian outlaw motorcycle gang members through the National Task Force Operation Morpheus and the National Anti-Gangs Squad.

The assistance provided by interstate officers from gang crime investigation areas is an outcome of this cooperative national framework.