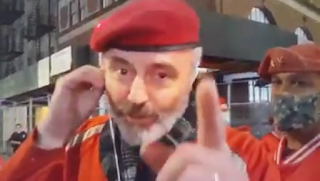 Radio.com is reporting that " Members of the Guardian Angels got into a confrontation with looters at a Foot Locker in NoHo Tuesday night—a clash that ended with Guardian Angels founder Curtis Sliwa possibly suffering a broken jaw. Sliwa told the Daily News dozens of looters entered the Foot Locker at 716 Broadway before 10:25 p.m. He said the Guardian Angels, a volunteer organization of unarmed citizens, “started throwing guys out the door” but that more looters—he said hundreds—returned, prompting a larger confrontation. 'Once they were inside, they summoned others with their smartphones. It was like flashmobbing,' Sliwa said."

It didn't sound like Curtis' jaw was actually broken but one member did receive a serious eye injury and looks like he will lose that eye. Now that is f*cked up. Does this mean the alumni will have to come out of retirement to kick Communist ass? Is that what this means? Looters are sh*t. F*ck them. One of the protesters took a video of the Guardian Angels before the looting took place and put Curtis on the mic at 2:19. The Epoch Times has posted an interview with Curtis.

For the record, the Guardian Angels are a multicultural organization. When I was in New York during the crack epidemic I was one of the only white members. Everyone else was black or hispanic. When I went there the first time, Thomas Hunt aka Tut was the chapter leader. The second time when we were on the Deuce Fox was in charge. Fox is Latino. Tut was known as the New York City secret weapon. After leading a crack down on crack campaign with Paul Martinelli in Florida West Palm Beach Tut settled down in Chicago.

After New York I did some groundbreaking work for the group in London, England. I ended up signing on for a two year commitment in Ireland before a chapter was established. While I was in Ireland Curtis went back to London with a few Caribbean brothers and some racist football hooligans came up to Curtis and stabbed him in the face with a dart. Those POS throw darts into crowds at soccer games. They do not fight one on one.

I wrote Curtis and said hold on. Wait till I finish my commitment in Ireland. I'll be there with you. They're not keen on Americans in London. He was like, aint no white boy from Canada gonna tell me what to do. He went right back there and started a chapter himself. Sebastian joined him for that and ended up starting chapters in Europe including Berlin.

Curtis is tough as nails. He's not the best martial artist, he's just the toughest. The brothers would tell me about stunts Curtis pulled in LA after one of their guys got beat up. Curtis marched right in there with a small solid crew and kicked ass. This is how sh*t gets done when there are no witnesses, police or cameras. These looters exploiting a valid cause need to get their ass kicked. Gentlemen may cry peace, peace but there is no peace. The war is already begun.

This is a video of a white trash looter writing Black Lives Matters while a black woman says get the f*ck out of our neighborhood. Read between the lines soldier. You're on the wrong side.

BTW Curtis Sliwa isn't afraid of COVID1984 and he defied the ban to go swimming.