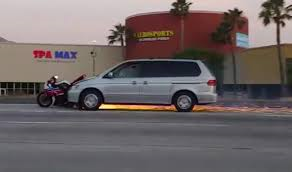 A minPanda’s video shows the minivan came to a stop after crashing into a fence.ivan was captured on video pushing a crushed motorcycle down the 91 Freeway in Corona, sending sparks flying, after a hit-and-run crash Friday evening.

The incident, recorded by Will Panda and shared with KTLA, occurred about 8 p.m. on the eastbound 91 Freeway just west of the 15 Freeway, according to the California Highway Patrol’s traffic incident log.

The gray minivan hit the motorcycle near the 15 Freeway but failed to stop following the crash, CHP confirmed.

The motorcycle rider, who was traveling at about 65 mph when he was rear-ended by the minivan, was ejected from his bike and found on the right shoulder of the freeway, the Press Enterprise reported.

The injuries to the motorcyclist were described as minor by a spokesperson for the Highway Patrol.

Video following the crash showed the minivan traveling down the freeway with the riderless motorcycle still stuck on its grill.
“It looked straight out of a movie, we could not believe it,” Panda wrote on his YouTube channel.
Investigators said the minivan eventually exited the freeway at McKinley Street.

The suspected driver, identified as 25-year-old George Cesar Valentin, was later arrested after trying to report the minivan stolen, the Press-Enterprise reported.

Valentin ultimately admitted to being the driver involved in the crash, according to the newspaper.