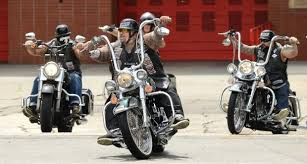 Police have undertaken a "significant organised crime operation" in the Bay of Plenty targeting the Mongols gang.

National organised crime group Detective Superintendent Greg Williams is giving an update on Tuesday at 1pm about the operation.

The Mongols, whose patch depicts Genghis Khan on a motorcycle, was founded in the United States 50 years ago and describes itself as the "baddest and fastest growing club in the world".

The bikie gang, led by national president Jim ‘JD’ Thacker, established a chapter in the Bay of Plenty last year.

It later expanded into the South Island, where it has a fortified club house on the outskirts of Christchurch.

In recent months, Mongols members from both chapters have been involved in a series of tit-for-tat incidents with rivals.

Thacker, a former president of a Bandidos chapter in Queensland, is among more than 2000 people known as 501s, deported to New Zealand since 2014 changes to immigration law.

The arrival of the 501s, named after the character section of their visas were cancelled under, has radically changed New Zealand’s gang landscape.

New groups, most notably the Comanchero MC and Mongols, have established and, according to police data, gang membership increased nearly 50 per cent in the four years to June last year.On May 15, the national gang register carried the names of 82 of the 501s.

Police previously said many of the deported gang members were powerful and influential figures in the Australian underworld who brought with them professionalism, a new flashy image and significant international connections.

There were concerns the arrival of the new international gangs – known for their propensity for violence, particularly their use of guns – would lead to clashes as rival groups like the Mongrel Mob tried to protect their turf. The US-based Mongols are the self-proclaimed baddest bikie gang in the world.
Last month, police confirmed they were setting up the first South Island branch of the National Organised Crime Group (NOCG) that would be based out of Christchurch and report to Police National Headquarters.

In a recent briefing to Police Minister Stuart Nash about the new NOCG team, police said there had been a “significant change in the organised crime environment” and the expansion of the Mongols into Canterbury was “an example of this”.

Recent investigations showed the Comanchero were also trying to “increase market share” in the South Island, the briefing said.