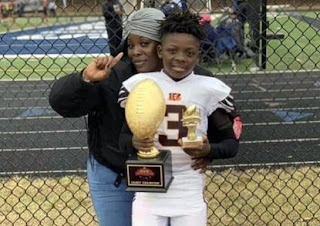 The New York Daily News is reporting that "Davon McNeal had just stopped by his aunt’s house to pick up a cell phone charger and ear buds on his way to a cookout. But it proved to be a fatal move.

The 11-year-old was shot in the head on Independence Day, one of three children gunned down around the country over the Fourth of July weekend." Curtis posted this.

"The tragedy unfolded just after 9:30 p.m. on Saturday when a group of five or so men started “shooting up in the area,” Police Chief Peter Newsham told WTOP-TV. “Five black males were shooting at each other,” Davon’s paternal grandfather, John Ayala, wrote on Facebook in a moving tribute that highlighted his grandson’s dreams of some day playing in the NFL. “How are we going to say Black Lives Matter when you guys are killing each other?”

Davon's life does matter. He was an innocent bystander picking up a cell phone charger on his way to a cookout. It breaks my heart. He reminds me of Cool Roy back in the day. Roy played football too.

Daven's grandfather is a founding member of the DC Guardian Angels. I'm so sorry.