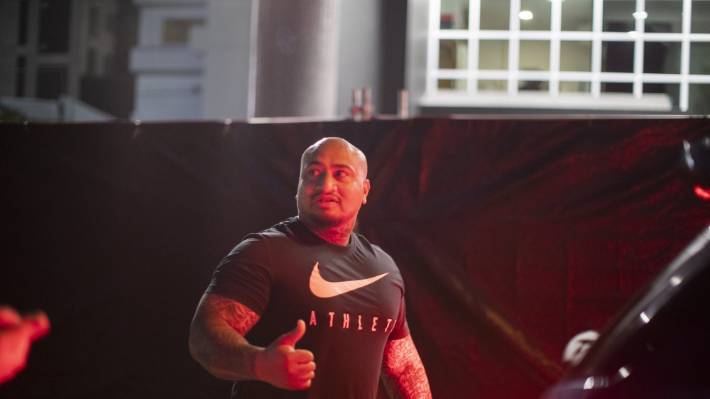 Deported former bikie gang boss Raymond Elise has been released from isolation in Auckland and says he’s pleased to be reunited with his family.

Elise was one of about 30 deportees from Australia spending 14 days isolation at the Ramada Suites in Federal St in the central city.

As dawn broke on Tuesday morning, just before 7am, Elise carried his bags from the hotel, through the high fencing and into the boot of a waiting SUV.

He appears to be the first of the “501” deportees released from the Ramada.

The father of four young children said he was looking forward to spending quality time with his family after a long time apart.

Asked what he planned to do now, Elise said: “Get back to work.”
The previous evening he said his stay at the Ramada had passed without issue and there had been “no dramas”.

On April 24, in the middle of the first coronavirus lockdown in Melbourne, Elise was surrounded by armed police while loading groceries into his car in a supermarket car park.

The president of the Victoria branch of the Rebels was told his visa had been cancelled, and he was therefore an unlawful citizen in Australia, where he had lived for a decade.

He was held in Melbourne Immigration Transit Accommodation as he awaited deportation to New Zealand, which was put on hold due to coronavirus.

More than 2000 people have been deported to New Zealand since Australia began hardline enforcement of a populist immigration policy in 2014.

They are known as 501s, after the section of the Migration Act that allows the cancellation of their visa.

Most have criminal records.
Others, like Elise, are deemed to be of bad character because of their association with bikie gangs and apparent links to organised crime.

In New Zealand, prior to 2010, he amassed convictions for assault, threatening behaviour, possession of an imitation firearm and unlawfully presenting a firearm at a person.

Elise, who grew up in Māngere, Auckland, earlier told Stuff he’d lived a crime-free life in Australia and worked hard, most recently in the construction industry as a labourer, to support his family.

He became involved with the Rebels about seven years ago through friends and quickly worked his way up the ranks by being a “committed member”.
“I did the ks on the bike.”
HIGH SECURITY FOR EX-CON AIR FLIGHT
The deportees arrived in New Zealand amid tight security on two charter flights on subsequent days earlier in July.

They flew in on a white Airbus A319 belonging to Australian charter airline Skytraders. At the airport they were met by Corrections and Ministry of Health staff along with a heavy police presence.

There were more uniformed police officers on site than deportees during their arrival, Stuff understands.

The deportees had handcuffs removed as they disembarked the aircraft.

They were taken to the Ramada in vans, a few at a time, entering the hotel wearing face masks before receiving a briefing from an official.