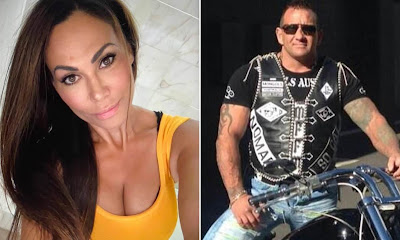 A Hollywood fitness trainer and model whose bikie leader ex-boyfriend was shot after being released from jail described him as a ‘kind, generous guy’ with a ‘great soul’.

The 47-year-old was released from jail last week after a five-year stint at Loddon Prison and Campbell received an 18-month community correction order after pleading guilty.

While the fitness model lost a tooth in the stoush where Bowden kicked one of the victims in the face and stomped on a man’s head over a drug debt, she claimed her former partner is a good person.
‘He’d see me carrying my grocery shopping and come and help me – he is a great soul,’ Ms Campbell told the Herald Sun.
‘He was kind, generous, is a really good guy.’

The mother-of-two – who says she worked with Britney Spears, Kim Kardashian, and Beyonce – denied having any knowledge that Bowden was a sergeant-at-arms of the Australian branch of the notorious Californian gang when they met in 2014.

When she appeared in court following the incident, Campbell told the judge she had ‘fell in with the wrong people’ after returning to Melbourne from the United States that year.
‘I f****d up my whole life up dating the wrong guy, and the domino effect has destroyed my life,’ she told the publication.

Campbell described her involvement in the home invasion as ‘stupidity’.
During the attack, Bowden stormed into the home wearing night vision goggles armed with a hunting knife, demanding cash from the terrified occupants.

He kicked one of the victims in the face and stomped on a man’s head before fleeing with around $700 in cash.

The pair were dressed in all camouflage and hiding behind a tree less than a kilometre from the home when they were arrested by police.

Campbell admitted to hitting a man with a spanner in self-defence and has maintained she was in the wrong place at the wrong time.
‘A part of me has died since that incident. It has traumatised me and destroyed my career.’
Bowden left prison last month with an entourage of gang members in a stretch limousine, but was shot and wounded 15 days later in a drive-by shooting in a Melbourne driveway at Epping on Wednesday evening.

The bullets from the brazen attack hit Bowden in his lower body but police say the two men involved are still on the run.
‘Detectives from the Echo Taskforce are investigating as the victim has links to the Mongols outlaw motorcycle gang,’ a police spokeswoman said.
‘Detectives are still working to determine the motive for the shooting and who is responsible.’

Bowden was treated by ambulance officers at the scene and later taken to hospital for non-life-threatening injuries.