UPDATED: Bikie boss believed to be victim of Civic stabbing 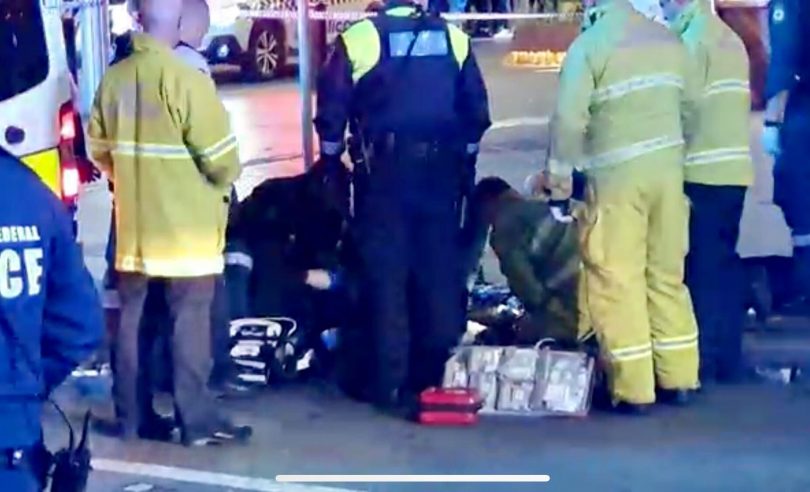 Paramedics administer CPR to a person injured in the fight. Photos: Supplied

UPDATED: 2:00 pm: A man, believed to be the head of Canberra’s Comancheros Motorcycle Club, is dead after a wild brawl at Kokomos in Civic early this morning.

Witnesses say that a fight began inside the venue before it spilled on to the street outside at about 12:05 am. 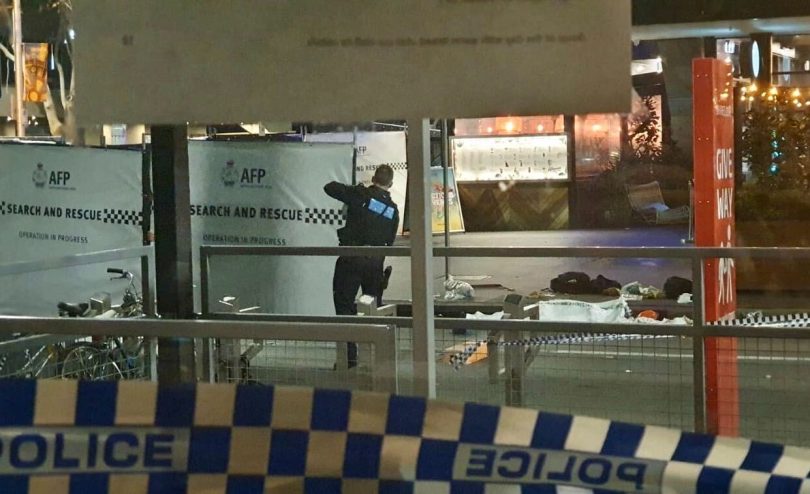 Police cordon off a section of Bunda Street outside Kokomos.

Two police are seen handcuffing a man who was taken away, however, police have confirmed that no arrests have been made at this stage.

Police said today they were unable to confirm the dead man’s identity but multiple sources have suggested that the man is Comancheros Canberra commander Pitasoni Ulavalu.

A witness who was present outside the venue at the time has told Region Media that the person who died may have been stabbed inside the venue. They’ve described seeing blood spray from what appeared to be a cut throat.
“I only saw what happened from across the road of the venue. I heard a rumour that someone stabbed a guy in the neck,” the witness, who declined to be named, said.
“A scuffle broke out as paramedics were working on the guy who died.
“There were police everywhere. The guy who died had a white cloth over him for about 45 minutes before police cordoned off the area”.

ACT Policing’s acting chief of criminal investigations, Detective Inspector Matt Reynolds, told the media on Sunday that two men were injured during the fight that occurred in front of a large number of witnesses.
“Paramedics attended and administered treatment, but unfortunately, one of those males passed away and we are investigating the circumstances surrounding the death of that male,” he said.


The second man was injured but those injuries were not life-threatening.
A number of people have already assisted police with their investigations, while forensic investigators scoured the venue which remained cordoned off and under police guard on Sunday.
“We are asking anyone who has video, CCTV or phone images in relation to this incident that occurred last night to contact ACT Policing,” Det Insp Reynolds said.

He said a cause of death has not been determined, although there are reports that he died after being stabbed inside Kokomos.

Det Insp Reynolds also said their investigations will include suspected links to outlaw motorcycle gangs (OMCG) in Canberra.
“In regards to OMCG, that will form part of our investigations, and we’re certainly not ruling anything out,” he said.
“There is CCTV of the incident and there were quite a number of people involved in the disturbance at the licensed premises. We’re reviewing all of the CCTV and speaking to as many witnesses as we possibly can.”

However, Det Insp Reynolds was unable to confirm if the dead man was the head of the Comancheros motorcycle club.
“We haven’t formally identified the deceased person and out of respect to his family and friends, we would like to do that before we provide any further information”, he said.

The death is the second to occur within two weeks, and follows an incident at the Kingston Hotel where a man from Dalmeny died after a fight with a Canberra man on 5 July. The Canberra man remains in custody after being charged with murder.

Det Insp Reynolds said it is extremely concerning that another person has died at a licensed venue and that the two incidents are unrelated.
“Two people have lost their lives and we are putting all our resources into investigating that,” he said.

Three ACT Policing units have been tasked with getting patrons to adhere to social distancing regulations, and while venues and patrons were cooperating, Det Insp Reynolds said it had proved challenging in circumstances such as those that occurred last night.