Antifa protesters tried to crash Sturgis motorcycle festival. It did not end well for them. 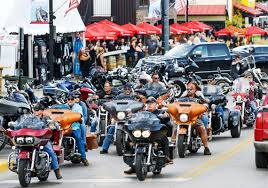 Tensions erupted at the Sturgis motorcycle rally in South Dakota on Saturday when several members of Antifa attempted to crash the biker festival.

Video taken from the incident shows a handful of Antifa demonstrators, of course with their faces covered, enter the rally. Police quickly surround the Antifa protesters as thousands of bikers scream at them to leave their event.

Thousands of angry bikers followed as police escorted the Antifa protesters away from the rally.

Video of the incident received more than 1 million views online by Sunday afternoon.

According to the Rapid City Journal, more than 350,000 people attended the Sturgis rally this year, the event’s 80th anniversary.

Controversy engulfed the event this year due to the coronavirus pandemic. Critics claimed it was irresponsible to hold an event, which features hundreds of thousands of out-of-state travelers, in the midst of a pandemic, especially because South Dakota has contained COVID-19 with relative success.

However, the city of Sturgis and South Dakota Gov. Kristi Noem (R) ultimately allowed the festival to go forward.