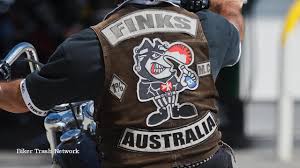 A dead Finks bikie has been named as the prime suspect in the murder of Queensland woman Tina Greer, who disappeared more than eight years ago.

Police have begun scouring a property on the Gold Coast for the 32-year-old’s remains following what they say was a highly credible tip-off.

Ms Greer was last seen by her family in Beechmont on January 18, 2012, before she travelled to the Scenic Rim town of Clumber.

She had planned to visit her bikie boyfriend Les “Grumpy” Sharman and be back to pick up her daughter the next day, but she never returned.

Her car was found parked at Governors Chair lookout, at Spicers Gap, on January 22.

A 26-year patch member of the Finks outlaw motorcycle gang, Mr Sharman initially told police Ms Greer had visited his home on January 18 but left about 9.30am the next day.

He has always been a person of interest in the case but was never arrested and died in a car crash on the Gold Coast hinterland in late 2018.

“We will be naming Les Sharman as our person of interest and that we believe he has murdered Tina,” Detective Inspector Damien Hansen told reporters.

A large-scale search began early on Monday at a property in Bonogin.

Det Insp Hansen is hopeful of finding Ms Greer’s remains and “very confident” they will be able to bring justice to her family.

It follows a media appeal in January where police offered a $250,000 reward and legal indemnity for information leading to the prosecution of her killer.

The reward has been extended to include any leads which help find Ms Greer’s body or to the conviction of people who helped cover-up her death.

Ms Greer’s daughter Lili Greer was 13 when her mum vanished and has spent every day of the past eight years “haunted by the unknown.”

She told reporters in January she cried on hearing of Mr Sharman’s death, not for him but because she believed she would never learn what happened to her mum.

Since the appeal, several people have come forward with fresh information that sparked Monday’s search.

A report will be prepared for the coroner once Queensland Police complete their investigation.