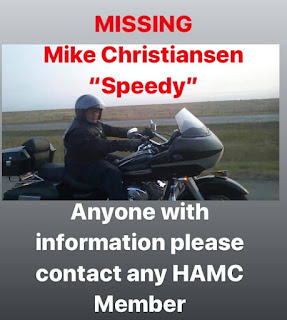 The Chilliwack Preogress os reporting that "A man thought to be tied to the Kelowna chapter of the Hells Angels died in a motorcycle crash over the weekend in the Fraser Valley. Michael “Speedy” Christiansen was found dead on Monday morning (Sept. 21) near Ruby Creek on Highway 7. Investigators believe the collision occurred sometime over the weekend between Sept. 18 and Sept. 20." Michael Christiansen came out to the East Van chapter with David Giles and was reported to be a founding member of the Kelowna chapter. Michael Christiansen was charged in the famous Lennoxville massacure but was later acquitted.

Who knows, they could have Juel Stantoned him. Giles did not end on good terms with the club.

The last three Hells Angels murders in BC were not rivals