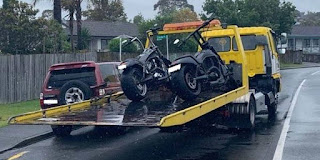 (video) — More than 200 tickets have been issued and three vehicles – with more likely to follow – have been impounded by police after a gang funeral procession sparked alarm and dozens of complaints this month.

Hundreds of Tribesmen gang members in cars and utes, and on motorbikes, took part in the procession in Auckland on November 7. Video footage shot at a North Shore intersection showed people hanging out of windows and burnout smoke.

The procession was to honour Tribesmen gang member Merc Papa-Hugh Lei-Tama Maumasi-Rihari, who died while riding with other gang members on SH1 in Canterbury the weekend before.

The 21-year-old died after his motorcycle and a car collided.

Police monitored the procession, including both filming it and using the Eagle helicopter, on the day.

This afternoon, they announced action taken against some of those involved since.

“Waitemata East Police have been making follow up inquiries in response to complaints from the community relating to dangerous driving behaviour across the North Shore [on November 7],” Waitemata East acting area commander Inspector Simon Walker said.

“The reports related to a very large gang funeral procession involving more than 100 motorcycles and 150 vehicles.”

Police received more than 40 complaints from the public in relation to dangerous driving activity, including vehicles being driven on the wrong side of the road, intersections being blocked, passengers sitting outside vehicle windows, dangerous overtaking, motorcyclists not wearing helmets and sustained loss of traction close to pedestrians, Walker said.

“Over the past few weeks, Waitemata police have been investigating these complaints and reviewing footage of this activity.

“As a result, more than 200 infringement notices have been issued to drivers involved in this gang procession.”

More than a dozen vehicles had also been identified as being involved in serious driving offences, he said.

“To date, two motorcycles and a car have been impounded by police and our inquiries are continuing to locate and impound others.”

Police were also trying to identify drivers who might be liable for prosecution.

“The safety of our community is our number one priority. While we appreciate the family and friends of the young man who passed were grieving, the driving behaviours on display presented a very real risk to those involved, as well as other road users, and will not be tolerated.”

Those taking part in funeral procession rides need to consider others, he said.

“If you choose to put other motorists at risk through dangerous driving activity, such as sustained loss of traction, you can expect follow up action from police and your vehicle may be impounded.”