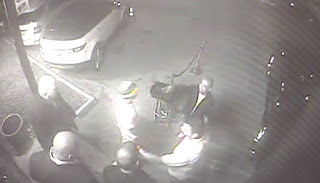 (video) — Nearly a dozen people have been arrested in connection with a Valentine’s Day shooting at a nightclub in Edinburg, the city police department announced Friday at a press conference.

The arrests took place in seven cities mostly across the Rio Grande Valley.

Just after 3 a.m. on Feb. 14, Edinburg police responded to Jaguars nightclub in reference to a shooting.

Police say they discovered two victims, one with multiple gunshot wounds and another who had been severely beaten. The victim who was shot was a member of the Bandito Motorcycle Club and the victim who was beaten was an associate of the club.

Investigators learned the victims were attacked by members of rival motorcycle clubs known as the Mongols and Pagan’s.

“If you commit those crimes in the city of Edinburg, we will identify you, we will track you down and you will be prosecuted,” Edinburg police Chief Cesar Torres said Friday.

A total of 42 warrants have been issued, and police say there could be more arrests.

The investigation was a joint effort between the Edinburg Police Department, the Texas Department of Public Safety, the Drug Enforcement Administration, FBI, ATF and the Hidalgo County Sheriff’s Office.