Ismael "El Mayo" Zambada of the Sinaloa cartel, was arrested on the afternoon of Monday, February 22, in the Mexicali valley, in possession of several long weapons, tactical equipment and a few kilos of drugs.

An alleged operator of "Los Rusos", a lieutenant of one of the wings of Ismael "El Mayo" Zambada of the Sinaloa cartel, was arrested on the afternoon of Monday, February 22, in the Mexicali valley, in possession of several long weapons, tactical equipment and a few kilos of drugs.

It was elements of the State Security and Investigation Guard (GESI) who carried out the operation that culminated in the entrance to the Miguel Alemán neighborhood, at the junction that makes the Mexicali-San Luis Río Colorado highway, right on the bridge that connects both municipalities.

At the mentioned point, the 2004 Grand Cherokee pickup truck with Anapromex FV-53-155 plates was intercepted when the crew member tried to turn onto the federal highway, in the opposite direction.

The uniformed men stopped 25-year-old José Fernando Aguirre Barreras, also known as "El Güero", after a search inside the car, they secured several firearms, which according to the police report, were observed from the outside. ( He is presumed innocent , as long as  his responsibility is not  declared by the judicial authority. Art.13, CNPP)

The weapons confiscated were:

-A long gun with the legend XK 530773, Arsenal Las Vegas NV, with an accessory which has the legend Pat Pending SM 13, with 39 useful shots.

-A long gun, with the legend Palmetto Magpul and 39 useful shots.

-A sawed-off shotgun with the legend Remmington, model 870.

-A long gun with the Winchester legend model 72atrade mark. 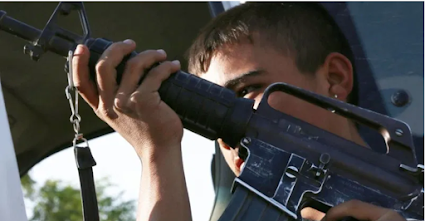 After the first investigations carried out by elements of the GESI, the authorities identified “El Güero” as an alleged operator in the service of José Alexander Sánchez Félix “El Russo”, one of the main heads of the Mexicali mafia activity.

The Mexicali border area is disputed by the Sinaloa Cartel and the CJNG:

The border area of ​​Baja California is disputed by remnants of the Arellano Félix Cartel, the Jalisco Nueva Generación Cartel, in addition to "El Mayo's" Sinaloa group.

In November of last year, in the urban area of ​​Mexicali, 12 alleged hitmen were detained by elements of the State Security and Investigation Guard (GESI). According to a report from the State Attorney General’s Office, they were subjects recruited by the Sinaloa Cartel from the rehabilitation center “Jóvenes de Mazatlán, una Oportunidad de Vida, AC”, to whom 2,000 pesos a week were promised.