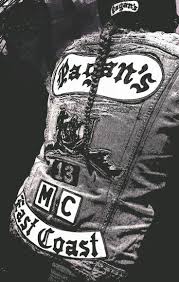 A federal grand jury in Pittsburgh has handed down more charges against two dozen suspected members and associates of the Pittsburgh chapter of the Pagans Motorcycle Club who are accused of dealing cocaine and heroin, the U.S. Attorney General in Pittsburgh said Friday.

The superceding indictments added the names of three more people to the indictments that came in December against the Pagans in the region, including some high ranking members, who are accused of dealing heroin, cocaine and methaphetamine, according to Attorney General Scott Brady.

That investigation began in August 2018 and included the use of wiretaps on Pagan members, prosecutors said. The December raid by some 300 law enforcement members and seven special tactical teams of 11 locations, including the Pagans’ clubhouse in McKees Rocks, yielded a large amount of cocaine, heroin, methamphetamine and fentanyl, as well as $28,000 in cash and 10 Rolex watches.
In the indictment unsealed on Friday, these suspects were charged with two conspiracy counts in which they allegedly conspired to deal more than 500 grams of cocaine.

All of those suspects were charged in an indictment handed down in December.

Added to that indictment Friday are:

Prosecutors also charged Peluso, Botta and Snelsire with possession with intent to distribute more than 100 grams of a heroin mixture during the same 11-month period last year.

The second superseding indictment accused a dozen more people who were named in the December indictment, of two counts of conspiracy.

Those from Pittsburgh were:

• Malik Johnson, 30, of Pittsburgh, was named only in the indictment unsealed on Friday.

Indicted on conspiracy charges of distribution and possession with intent to distribute 500 grams of a substance with a detectable amount of cocaine were Kushik, Hairston, Wofford, Johnson, Zilka, Walker, Camacho, Collins, and Taranto, between last August and November .

Kushik, Hairston, Wofford, Johnson, Zilka, Walker, White, Cherepko, Hulboy and Crivella also were charged with conspiracy to distribute and possession with intent to distribute a kilogram or more of a substance with a detectable amount of heroin, during that same time frame.